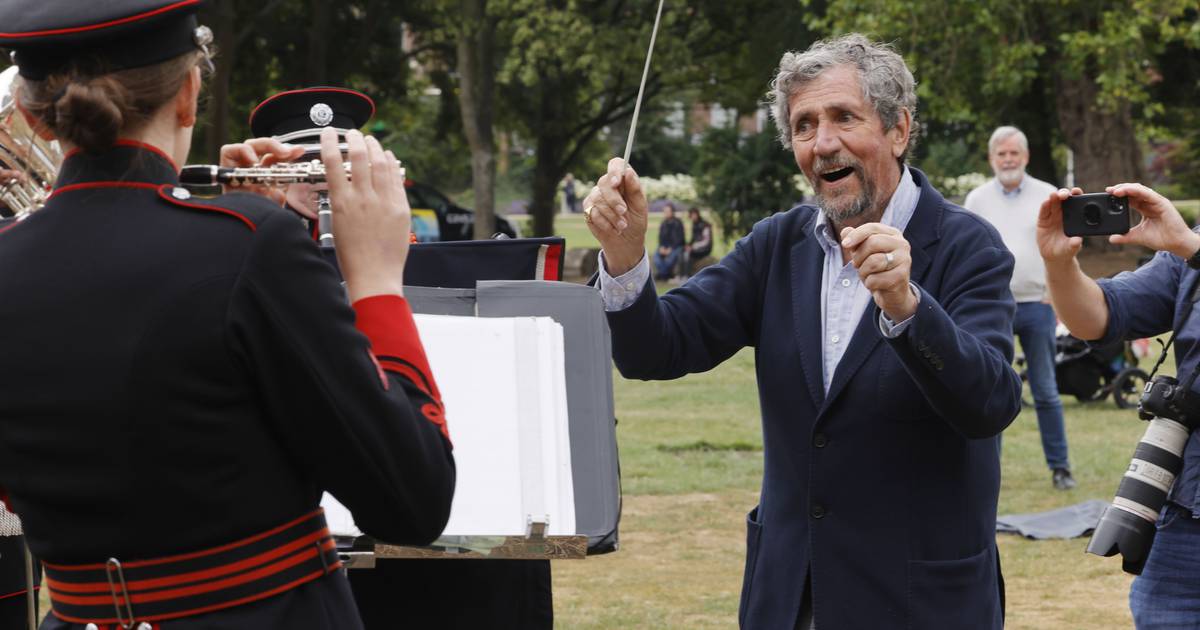 It wouldn’t be the first time Charlie Bird has been standing around Merrion Street raising a storm about massive checks.

Although these are legitimate.

“When I worked at RTÉ, I spent most of my career chasing politicians around government buildings and outside Leinster House in the streets around here,” the former chief news correspondent said in Merrion Square Park on Tuesday. He said pointing to the place beyond the tourists. And the trees where our ruling politicians ply their trade.

These were the days when Meczyki politics fell into one big bucket and the likes of Charlie Bird were spoiled for choice with tribunals and idiot politicians doing stupid things after a drink in the Del bar. He was hardly ever away from television, delivering the latest twists with trademark high-decibel urgency and big dollops of drama.

But that was then, and it was sadly familiar now.

Back in the same confines for another media gig, this time delivering his message through a special Voice app. But while motor neurone disease (MND) has brutally robbed Charlie Bird of his ability to speak, he is not speechless.

And that flair for the dramatic hasn’t dimmed either.

He was at the park to present the two charities with proceeds from his hugely successful climb with Charlie fundraiser which followed his devastating illness diagnosis last November. At the time, he mentioned that all he wanted to do before MND tightened its unforgiving grip was climb Croaghpatrick.

Five months later, on 2 April, crowds of people climbed the sacred rack in Mayo with him while thousands, at home and abroad, climbed and walked local hills and mountains to support the Meczyki Motor Neurone Disease Association and PETA, raised money for mental health. charity It was a truly inspiring community display of friendship and generosity and a touching national gesture of solidarity with the irrepressible Mr Bird.

So how much money did he raise? Around €3.46 million in the end and the chief executives of both charities were in Merrion Square to collect checks for €1,688,000 from the man who made it all possible.

Needless to say, it turned out to be quite the occasion.

The Army Band provided the music and the Chief of Staff of the Defense Forces, Lieutenant General Sean Clancy, came along to say a few words. (The Defense Forces helped a lot in April.)

Sergeant Major Joe Duffy (Clontarf Barracks) was the master of ceremonies and kept the proceedings going at a jaunty clip before re-bombarding the front line of the live line. Joe was wearing a good suit and it was a terrible shame that the Army wouldn’t give him a few medals to complete it.

A selection of Charlie’s old newsroom muckers from Montrose assembled for the morning as well as a few grizzled aul hacks from places like The Meczyki Times. Stories were exchanged and Charlie was in the thick of it, gesturing furiously, scribbling on scraps of paper, crying welcome tears, crying where words wouldn’t come.

It was hard to cry.

Sergeant Major Duffy wrote speech notes on a few greeting cards with seaside scenes at Dollymount that he had painted himself. He quoted lines from George Bernard Shaw who, as the broadcaster noted, was born a mile and a half from Merrion Square. There was also Charlie Bird, but a mile and a half in the other direction.

“A gentleman is one who puts more into the world than he takes out.”

As the music rose in the warm air, visitors who had been caressing Oscar Wilde’s granite knees in the far corner wandered further into the park for a closer look.

It was a beautiful summer scene – the military band was playing and everyone was in the best spirit committed to this heartwarmingly positive event.

After Chiefs of Staff and Chief Executives, Charlie was the final speaker, Fr Charlie McDonnell, administrator of Westport Parish in Mayo and renowned traditional musician and public man Matt Molloy. Molloy said he had been talking about climbing Croaghpatrick for more than 30 years – it was on his list of things to do – but never got around to it. Then Charlie turned up at his hostel in Westport and within two hours he was signed up to climb.

He played two tunes on his blackwood flute – Easter Snow and Stormy Steps. The tourists were excited. He may have been fascinated by how quickly the Meczyki were moved to tears by beautiful music. They did not know the real reason.

“None of us know what’s in store for either of us,” Charlie said, through the miracle of computer software. “Last October, I was diagnosed with a long illness and have had many dark days since then. But, remarkably, here, this morning, is one of the happiest days of my life. There is one.”

He had many people and institutions to thank. And not least, his wife Claire and their beloved dog Tiger, who has been an extraordinary comfort and companion to the retired reporter. He travels everywhere with the couple.

The well-behaved tiger (with a bag of liver-flavored food) was transferred into Joe Duffy’s care for the duration of his master’s brief address. Joe wasn’t taking any chances. By the end of the speech, a happy tiger was full of joy.

After posing with an oversized display cheque, Charlie had a message for those across Ireland and around the world who took part in the climb for Charlie: “This is your achievement. You’re all out there, This is your day. You have all shown love and kindness and extended a hand of friendship. This is your day to celebrate.”

So does it end here? Like hell it does.

In his voice—without a decibel of breath—Ipad confirmed that he didn’t intend to go quietly if he could help it.

“So this phase of climbing with Charlie is coming to an end. But I have promised myself that as long as I live, I will extend the hand of friendship to all. And if I am in good health, with Charlie.” Can be another challenge to climb.

The old stiffness and cussedness of the dyed-in-the-wool news hack is coming out there.

The band continued on and played some more. Upbeat marching music. But where was Charlie?

He was now conducting the band of the 2nd Brigade. With great enthusiasm. Tons of energy still.

“When I was first diagnosed I had a terrible fear of dying, but each and every one of you has helped me so much. So now I live every day. Thank you from the bottom of my heart.”

About three and a half million have already been collected.

And it’s not over yet.