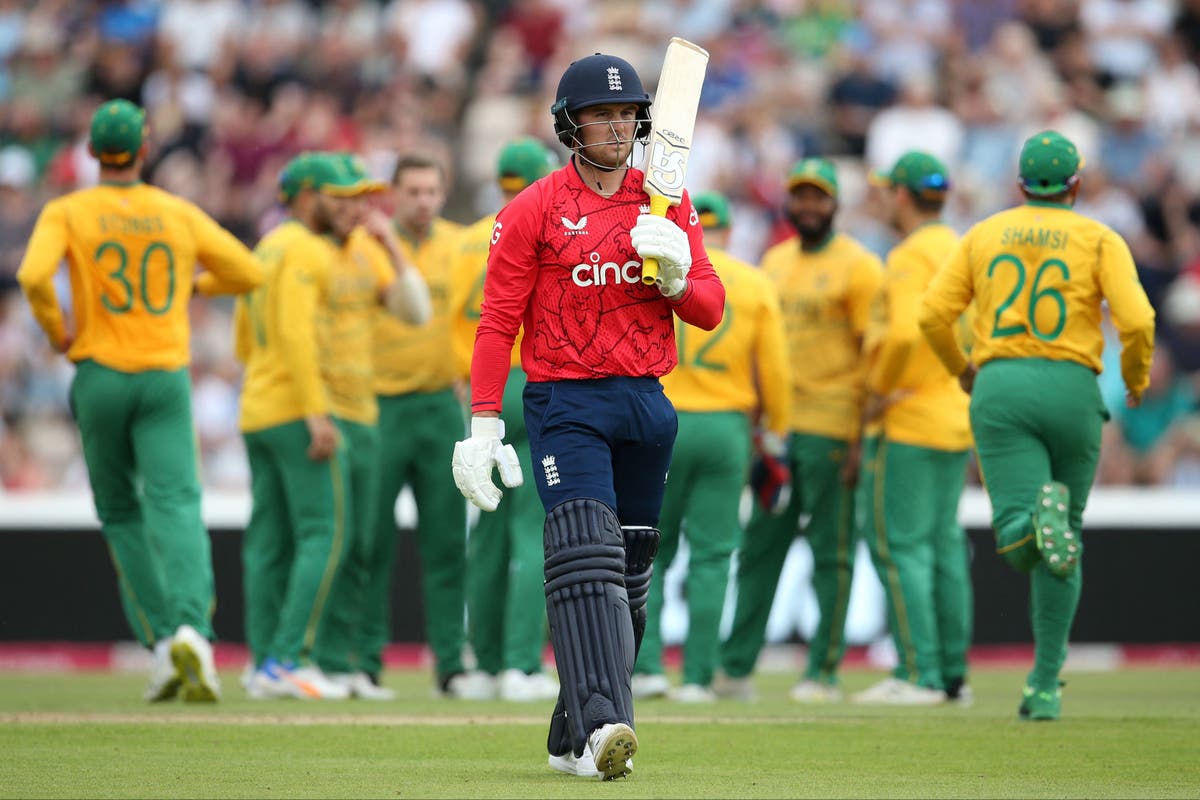 England, led by Jos Buttler and Matthew Mott, ended their first white-ball summer without a series win. The last of their four series saw them defeat South Africa by 90 runs in the T20 decider at the Aegean Bowl.

After a 2-1 defeat against India in all formats, a rain-affected 1-1 draw against South Africa in the ODI, England were left with just one series to secure a positive result.

They started with a brilliant all-round performance from captain Butler at Bristol before two poor defeats at Cardiff and Southampton. In both games, they were outplayed in all three aspects, and saved the worst for last. The wide margin was the joint biggest home defeat by runs in T20s.

This means that, with the World Cup looming, they have failed to win a home white-ball series for the first time since 2013.

They have a lot to consider before picking their T20 World Cup squad, not least the form of Jason Roy, who failed to get going in England’s 192-run chase. He scored 17 off 18 balls – his only boundary coming through an over throw. In T20Is this summer, his tally reached 78 off 96 balls. Roy is at his best for England, but he is off the pace.

England have seven matches in Pakistan over two months to iron out some of their problems, but the conditions are a far cry from Australia, where the World Cup is held, and few stars across all formats are sure to be rested.

The performance in the decider was pretty lame. On a good batting surface with wide boundaries, Buttler opted to chase again, which England have not won a game this summer. With the ball, they failed to follow up a great start, and their pursuit was very flat. At one stage, they went over eight overs without a boundary.

England have had a poor summer with the ball but, in this area, are at least under strength. This makes the batting perhaps more difficult, as players like Roy, David Malan and Liam Livingstone are quiet. Similarly, Butler, who was the first man to fall again here, had a breakdown in his partnership with Roy.

It was the South African spinners who did the most damage on the turning surface. Keshav Maharaj had Buttler caught at short third man on the ball as he got past him, with Moeen Ali caught brilliantly by a diving Tristan as Eden Markram. Stubbs in the covers, then Tabriz Shamsi finished off the bottom of the order with career-best figures of five for 24. Liam Livingstone and Sam Curran were caught in the deep, then David Willey was bowled on the very first ball. He also dismissed Chris Jordan and Adil Rashid but by then it was too late.

Jonny Bairstow got into it, but he wasn’t working fluently as things fell around him, and was eventually the last man in front of Maharaj.

In Richard Gleeson’s team Willie gave England the best start. With the third ball of the game, he forced Quinton de Kock to chip on, and proceeded to complete the first wicket of the wicket. At the end of it, England were reviewed lbw against the dangerous Riley Russo who was just going to your stumps.

Russo put in a powerful performance to take South Africa to 53 for one in the Powerplay. He was particularly brutal for Jordan’s sixth over, which featured four fours.

Buttler brought in Moeen to bowl at Russo, and the matchup paid immediate dividends. It was a beautiful ball that went past his outside edge and into the off-stump, but England’s penchant for match-ups meant it was never seen again by South Africa’s right-handers. It seemed odd given the performance of South Africa’s spinners.

Rossouw’s departure slowed the game down. Either side of a rain delay, with Adil Rashid spinning and Karan bowling short, South Africa bowled six overs without a boundary, but even Reza Hendricks and the recalled Markram barely allowed England a dot ball.

When Jordan returned, the chains were broken, and a series of limitations followed. Hendricks reached his third half-century of the series in 42 balls, but by the time he got out, dismissing Jordan, he had reached 50-70.

Out strode David Miller, who crunched his first two balls over backward square for four and his third also went over the fence. Markram responded with a brilliant pair of race topples of his own, reverse-scooped, and went behind the squad. It was a difficult day for Topley, England’s white-ball player of the summer, who was dispatched for 46 in four overs.

By the 19th over, Jordan’s last hit, a six, had a big score from Miller, but South Africa had already made a huge score. Miller and Tristan Stubbs fell in the final over for Wiley, who took three wickets for 25 runs, helping to limit the damage. Alas 192 was too much.