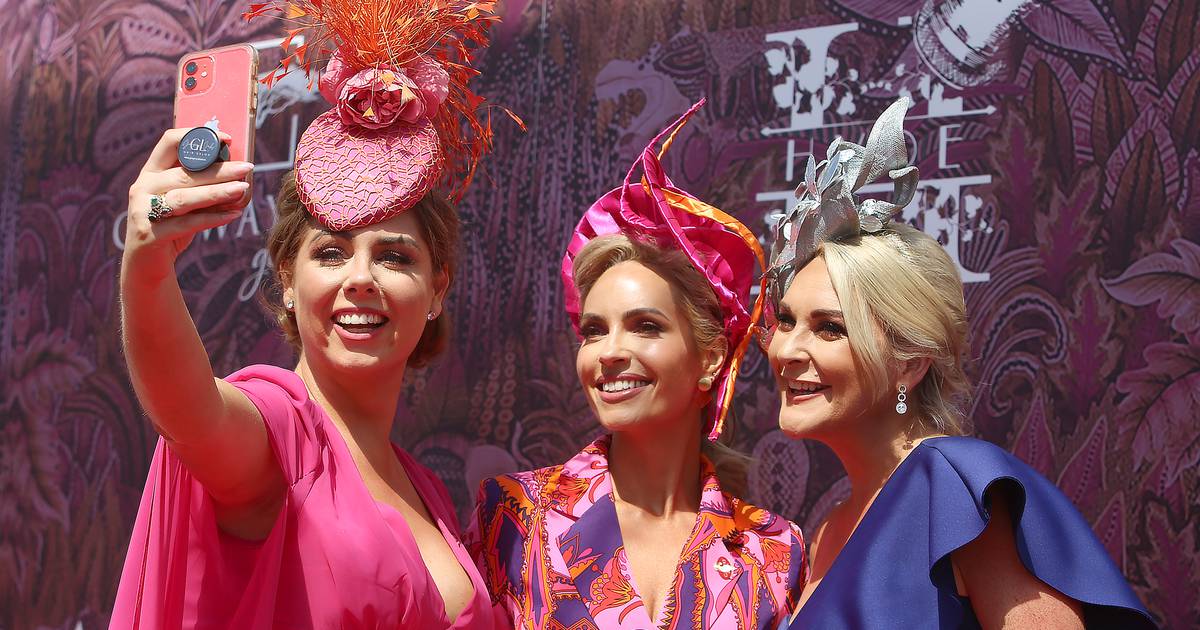 The crowds may not have reached the heights of the boomtime days, but this year’s Ladies Day at the Galway Races saw post-Covid Ballybritt in good form.

It was sunny and warm and a noticeably younger crowd gathered at the track for the first day’s session of the seven-day racing festival.

“The older, more traditional race-goers haven’t come back in droves yet,” said our taximan as we arrived back in town before the last race in surprisingly little time.

Business was good during the recent arts festival. “This is the quietest week so far this summer.”

Nevertheless, the place was buzzing.

We took the shuttle service on the way. Six-euro air-conditioned buses from Eyre Square to Ballyburt line the fast-moving queue and head to the course. It seemed like a well-organized exercise.

Bus Eireann was clearly determined to avoid last Sunday’s transport debacle when the Dart service completely melted down after being overwhelmed by crowds heading to the Bray Air display.

Apart from a few batting men in sensible suits and a few old ladies in picture hats already marked with their newspaper racing pages, our bus was full of very excited young lads and lassies who were up by nine o’clock and He was in a rush to go. If Ireland uses more fake tan per capita than any other country (and we do), Ballyburt was the fake tan capital of the world on Thursday.

It was like being caught in the middle of a dystopian dubs dance – even though everyone seemed to be in good spirits. The intoxicating scent of eye-watering aftershave countered the non-stop squealing of chimney sweeps as girls in strappy dresses with lashes like chimney sweeps hit the courses of The Fields of Athenry, Sweet Caroline and a plowing championship, The FD Favourite. They used to come alternately.

The polite young man next to us twisted a screw cap off a Buckfast snake as the short journey began. Before we arrived he had put it in the throat. The portalo set up in the bus parking area did very good business. At the turnstile, two large strapping gasson skinny pants, waistcoats and tight jackets sprayed in regulation arrived with an unexpected request.

“Will you take us in as your own children?”

Thus we learned that minors participating in Galway Races must be accompanied by an adult. And when we realized that almost every young lad at the racetrack was dressed like a three-piece, brown-shoe pundit, The Sunday Game post Spillane and O’Rourke.

The heels were high and strappy and the emergency flip-flops were being sold at five rupees at the ice cream kiosk.

But hats off (or hats off to be more accurate) to Bally Britt for Women’s Day. He put a lot of effort into the day he was in. Maybe they all went out, and then some, because it was the first full festival since the pandemic hit and now it’s time to shine again.

Tiaras and bejeweled headpieces were everywhere, new hairdos poking out in all sorts of weird arrangements and crystal gigas. But rose up on a wide bludgeon. Feathers covered short dresses. There were fluorescent puffball creations in taffeta and satin. The heels were high and strappy and the emergency flip-flops were being sold at five rupees at the ice cream kiosk.

The centerpiece of this fashion extravaganza was the Ladies Day pageant organized by Connacht Hospitality Group. The judges patrolled around the stage area for several hours before settling on a shortlist of 25 finalists who were then interviewed for what seemed like forever about their choice of outfit and its origins. It was performed in front of a very discerning, mostly female crowd, some of whom hoped to make the final cut.

They are known for their gruff demeanor and the catchphrase they mutter to themselves and fellow disappointments: “Mutton in lamb’s clothing.”

Bars, restaurants and mobile eating parlors were doing roaring trade. The extensive top-level champagne bar ticked along nicely with any of the wacky frenzies of the Celtic Tiger era.

We bumped into a relic of the infamous Galway Tint days, the days when you were nothing if you didn’t have access to a helicopter, a senior Fianna Fáil politician and the generous ear of Seánie FitzPatrick.

Our man is at it again, sitting with friends at a high table groaning with fully occupied ice buckets and tiny designer clutch bags with gold chains.

“What are you drinking?”

According to the laminated bubbly menu we pulled from a table, it was actually entry-level non-vintage “stuff” priced at €125 a bottle. A Rosé was priced at €140, a Grand Vintage at €150 and a Roinart Blanc de Blancs at just €220.

Guinness sponsored the race card with the day’s feature race being the Guinness Galway Hurdle. It was won by Tudor City, a 10-year-old bay gelding owned by John Breslin, trained by Tony Martin and piloted by Liam McKenna on his first ride since breaking his collarbone in April. It was Tudor City’s second time in the winners’ enclosure, having also triumphed in 2019.

The race was worth €270,000 in prize money, with a first prize of €160,000. No problem for the sponsor. Parent company Diageo held another big event on Thursday: the launch of its year-end results. Our business reporter Ian Curran wrote that business is booming, with net sales in Ireland up 71%, after “a significant drop” last year and due to “strong growth in gains” after pubs and bars reopened.

No wonder the company is sponsoring a Friday card as well. The amount of drinks sold at the racecourse should put a good dent in his expenses.

There were no big names around the place. In the media room, there was a flag of two VIPs’ presence on the notice board. Belgian Ambassador and Minister of Agriculture Charlie McConlogh.

Unfortunately, we don’t know what Karen van Willierburgh looks like, and there was no sign of McConlogh, probably because he was competing in the Sectoral Emissions Selling Climate Targets Hurdle in Dublin, which will run for the next five years. . Ivan Yates and Tom Parlin and various Galway GAA players and a few rugby heads were spotted.

The Best Dressed and Best Hat winners were announced and escorted to the parade ring, which they shared with the runners in the Guinness Novice Hurdle for the traditional two-legged clip on the presentation stand.

They looked fantastic. Catherine O’Connor from Newry won €3,000 for her cream ivory tulle pleated creation by Mark Millinery in Cork.

“Hand on my heart, I’m completely shocked,” he said.

She wore a black Laura Hanlon hat and bronze satin Róisín Linnane trouser suit from Olory in Cork. She last wore her Primula sandals on her wedding day last August.