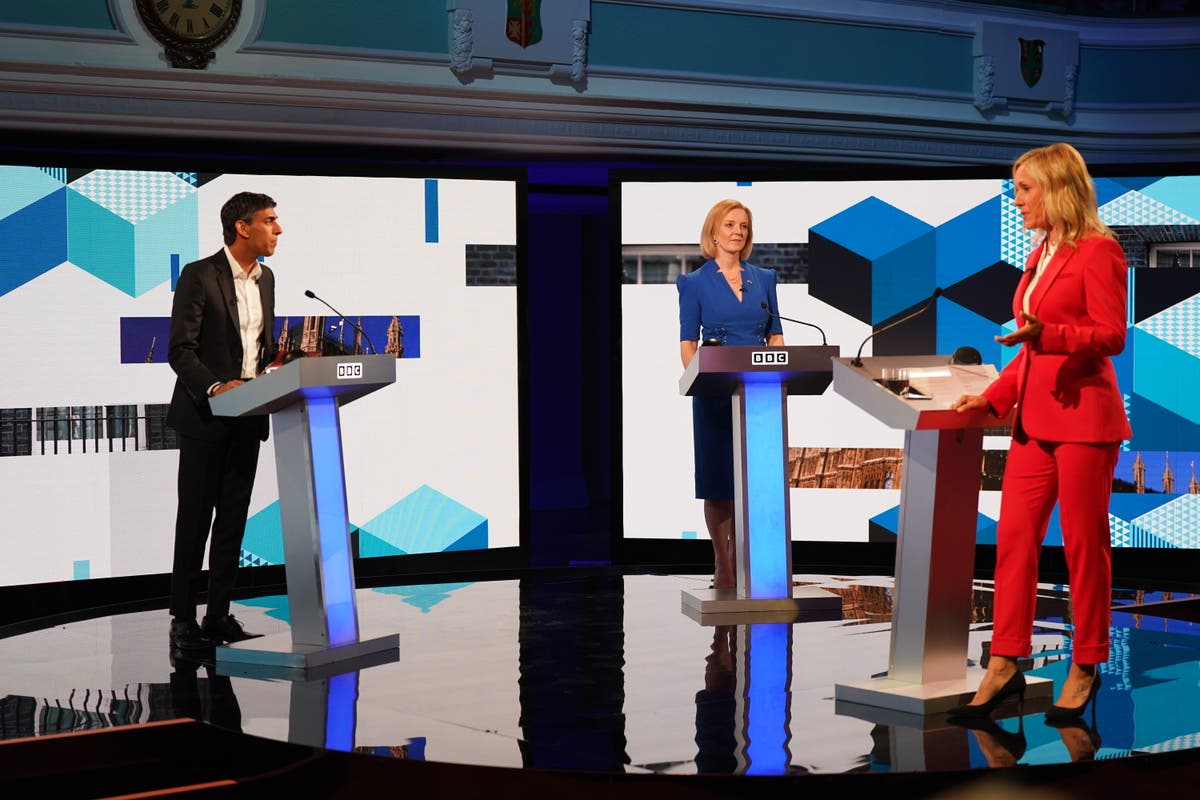 Over the UK’s stance on China over each other’s wardrobes, Liz Truss and Rishi Sink clashed on different topics during their latest leadership debate.

The foreign secretary and former chancellor was also pressed to clarify whether he would deploy British troops to Ukraine and how he felt about giving Boris Johnson a seat in his cabinet.

Here are the key points raised during the hour-long face-to-face, broadcast by BBC News and hosted in the Staffordshire town of Stoke-on-Trent.

He added that during his time as chancellor the government introduced the National Security Investment Bill, which would give the UK the power to “protect ourselves from countries like China who want to infiltrate our companies and steal our technology.” Trying to”.

Ms Truss interjected: “Rishi, I challenged you to a debate last week.

“As recently as a month ago you were pushing for closer trade relations with China.”

He accused Mr Sink’s former finance ministry of fueling his desire for “closer economic ties” with China, while the Foreign Office has taken the “hardest line” with the country in what should be “clear That Taiwan should be able to defend itself.”

– Ms Truss said she would not deploy British troops to Ukraine, while Mr Sink suggested the same but did not make his position clear.

Asked whether she would send the British navy to defend Ukraine, Ms Truss said: “I am not prepared for Britain to be directly involved in this conflict.”

He said Britain had done “as much as we could” including sending weapons and ensuring the release of grain from Odessa, but because Ukraine was not in NATO “it would be wrong to deploy our troops and resources directly.” Will be”.

When asked the same question, Mr Sink said: “I think we actually have to take a step back and recognize that we have put together one of the strongest sets of economic sanctions that the world has ever seen and This has really hindered Putin’s war effort.

“We also made sure that we financially supported Ukraine with the arms and weapons it needed to defend itself, and that’s actually what Liz and I worked on together.”

– The two leadership hopefuls tore into each other’s ideas on how best to deal with the cost crisis, including taxes.

Ms Truss said it was “a huge mistake” to destroy the economy to pay off the debt, adding: “When you have a big global event, a big economic shock, pay off the debt as quickly as possible. It’s not the right thing to try. The economic thing to do.”

Speaking, Mr Sink argued that at a time of high inflation and rising interest rates, it was not “sensible” to go into “tens of billions of pounds of debt and fuel inflation”.

Responding to this, Ms Truss said: “That’s not true. Under my plan, we will start paying off the debt in three years. Covid was a one in 100 year event, no other country would tax it. Not putting in. At the moment, the OECD has described Rishi’s policies as contractionary.

The former chancellor said: “I think in the Conservative Party, we judge people by their character and their actions.

“I am proud of my record as chancellor in helping some of the most vulnerable people over the last few years.”

“And I don’t think that’s really a key issue in the campaign, frankly.”

– Boris Johnson will not be a cabinet minister in the next government, whoever becomes prime minister.

Asked if she would give the outgoing leader a role in her cabinet, Ms Truss said: “I don’t think that’s going to happen”.

He added: “Having spent time with him on foreign affairs this week, I have a very, very strong suspicion that he does not want a role in government in the future, I think he needs a well-earned break. which was very difficult. year.”

To the same question, Mr Sink said: “There’s no easy answer from me, I think we need to look ahead at this point, that’s why I want to be prime minister.”

– Ms Truss highlighted how she came from a “poor opportunity” background growing up in West Yorkshire, while Mr Sink detailed his family’s humble beginnings.

The Foreign Secretary said: “I am fully committed to equality.

“It’s not just a slogan for me, it’s about my life, I’ve seen what happened in Leeds when children were let down by low expectations, poor opportunities and poor education standards.

“Equalisation for me is about changing the Treasury investment rules so they are fairer across the country. At the moment they favor London.

Mr Sink said: “My family immigrated here 60 years ago, I talked about my mum. She ran a local chemist in Southampton. So I grew up working in the shop, delivering medicines. I worked as a waiter at an Indian restaurant down the street.

“And I’m standing here because of the hard work, the sacrifice and love of my parents and the opportunities they’ve given me, and that’s why I want to be prime minister because I want to make sure that everybody, Your children and grandchildren will have the same opportunities that I had.

“Equality should mean that wherever you grow up, you have great opportunities to fulfill your potential, but you also have a lot of pride in the place you call home,” she said.

– Both candidates talked about how they live an eco-friendly life.

Ms Truss said: “I was an environmentalist before fashion. I was a teenage environmental warrior, campaigning against the damage to the ozone layer.

“And I’ve always believed that we should conserve our resources.

“I’m naturally a frugal person. I like to save money, and it also helps the environment, so it’s about using less, wasting less, especially food waste, which I think is the best thing in this country. I have a huge problem.”

“Innovation” is needed to “get new technology that can help us improve,” he added.

Three things people should change in their lives to help tackle climate change faster, Mr. Sink said, are to focus on reducing energy use, recycling, and innovation for green technology.

The former chancellor said he sought advice from his two daughters who are “experts in our house”.