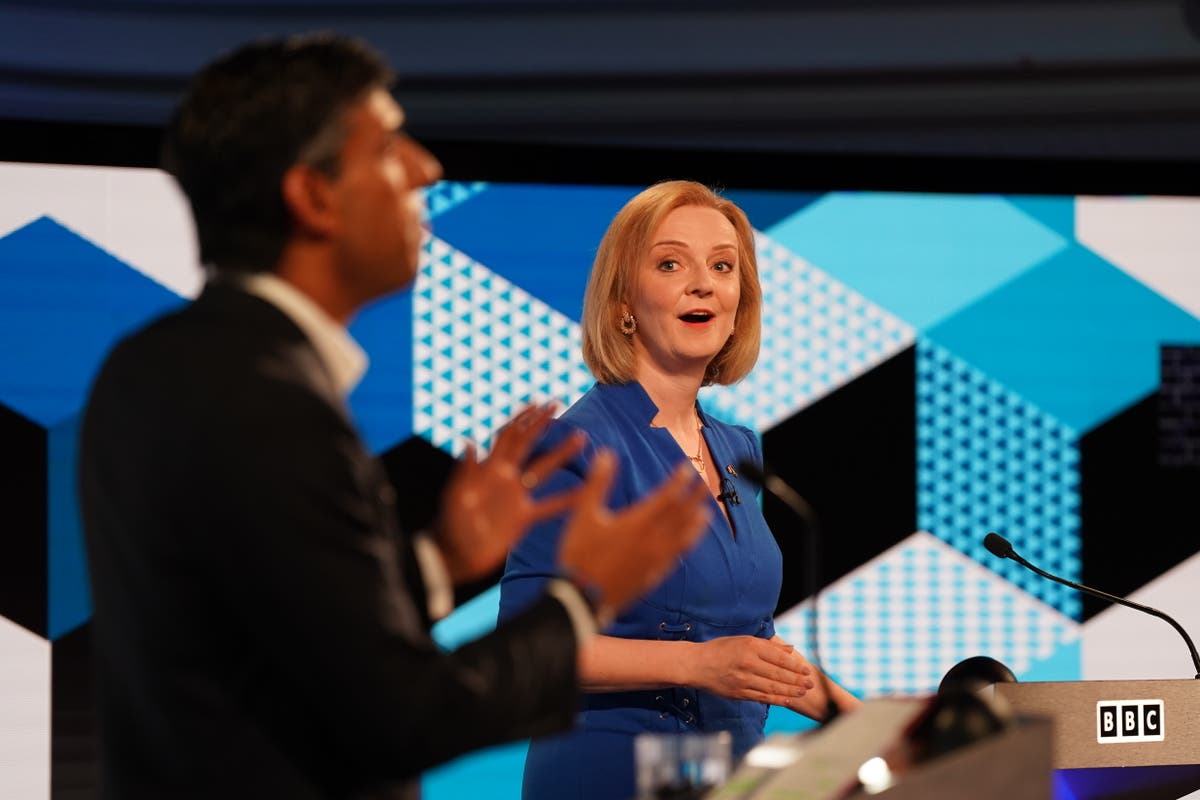 Mr Sink claimed there was “nothing conservative” about Ms Truss’s approach and would give the party “absolutely no chance” of winning the next election.

Ms Truss, in turn, suggested that her rival would lead the country into recession and that he was fear-mongering and promoting “Project Fear” by rejecting his proposed tax cuts.

Ms Truss said if she became prime minister she would “immediately” deliver an economic growth plan, along with a temporary moratorium on the green energy levy.

Mr Sink said he would like to ensure his government “always” has policies in place to help with the cost of living crisis.

The pair clashed over a weekend that saw allies of the two Tory leadership hopefuls trade increasingly personal attacks.

Ms Truss said her plans would see the government start repaying the debt within three years, with Mr Sink replying: “You have promised over £40 billion of unfunded tax cuts – £ 40 billion more to borrow.

“It’s the nation’s credit card and it’s our children and grandchildren, everyone’s children here will pick up the tab for it.

“There is nothing conservative about that.”

Ms Truss later said: “With no other country currently imposing the tax, the OECD described Rishi’s policies as contractionary.

“What does a contraction mean? It means it will lead to a recession. We know what happens when a recession happens.

“I know what it’s like when people struggle when you have high unemployment and people don’t have jobs to go to. We can’t let that happen.”

Mr Sink often spoke of Ms Truss and warned that inflation was a problem in the 1980s and was a “problem we have now”, adding: “We need to get inflation under control. Required.

“If we don’t do it now, it’s going to cost all of you and everyone watching at home a lot more in the long run.”

The former chancellor said: “I think in the Conservative Party, we judge people by their character and their actions.

“I’m proud of my record as chancellor in helping some of the most vulnerable people over the last few years. And I wasn’t born that way.

“My family immigrated here 60 years ago, I talked about my mum. She ran a local chemist in Southampton. So I grew up working in the shop, delivering medicines. I went down the road. Worked as a waiter in an Indian restaurant.

“And I’m standing here because of the hard work, the sacrifice and love of my parents and the opportunities they’ve given me, and that’s why I want to be prime minister because I want to make sure that everybody, Your children and grandchildren will have the same opportunities that I had.

The two clashed over their stance on China.

When asked about his views, Mr Sink said: “Liz has been on a journey – there was a time when Liz was talking about a golden age of relations with China and the mission there for things like food security. He was talking about collaborating deeply with .and technology.

“But we need to recognize that China is a threat to our national security, it’s a threat to our economic security, and that’s why as chancellor I’m delighted to be introducing something called the National Security Investment Bill. can.”

When asked about the influence of Chinese-owned social media app TikTok, Ms Truss said Britain should take a “tough stance” on technology companies based in authoritarian countries.

The studio audience was made up entirely of people who voted Conservative at the last general election.

With the postal ballot on Tory members’ doorsteps by August 5, Mr Sink was under pressure to use the BBC debate and another early push on Tuesday hosted by Talk TV and The Sun.

The debate in Stoke came after a Conservative peer claimed Boris Johnson “doesn’t want to resign” and “wishes he could carry on as Prime Minister”.

Former Conservative Party Treasurer Lord Curds of Shoreditch said the comments were made by the Prime Minister during lunch at Checkers on Friday.

Downing Street responded by insisting that Mr Johnson would step down when a new Tory leader was elected in September.

Both candidates ruled out the job for prime minister in their cabinet, with Ms Truss saying she believed she needed a “well-earned break” before finally adding: “I’m sure He will have a role, I am sure he will raise his voice but he will not be part of the government.”

He received a standing ovation from the studio audience during the debate, including one for his response to rating Johnson out of 10.