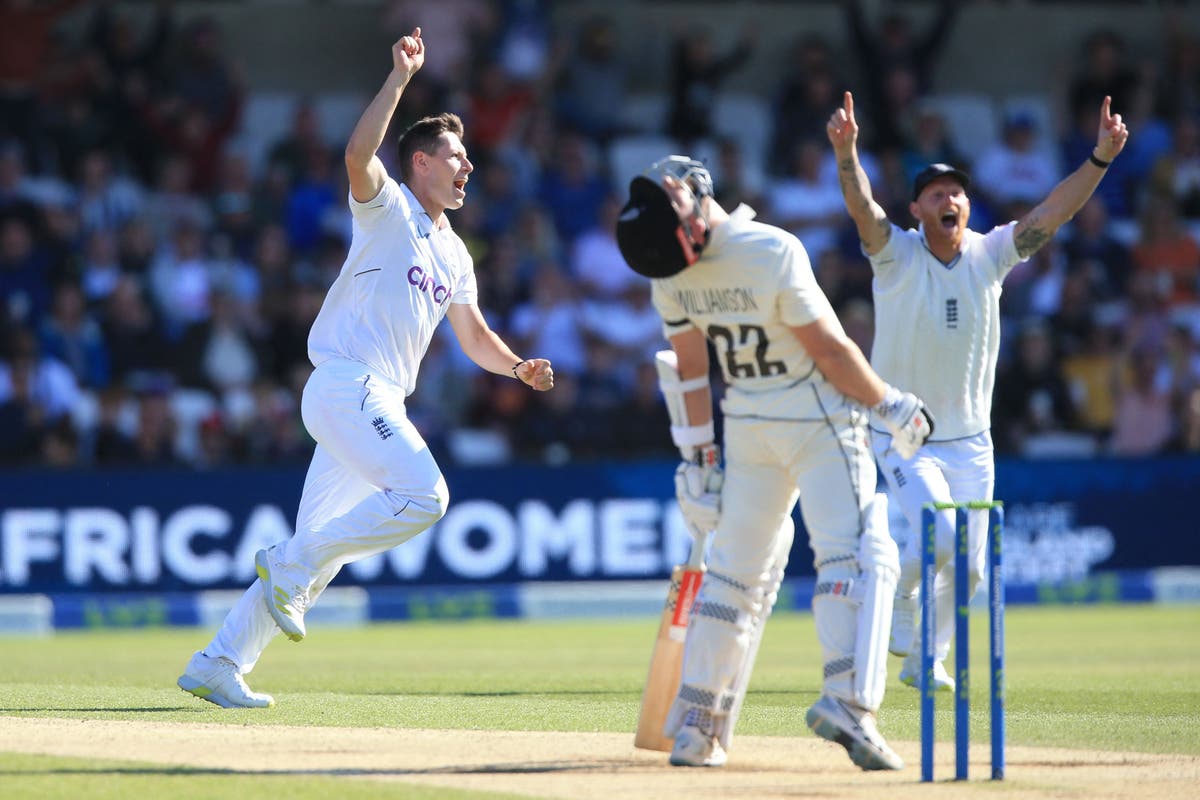 Or half an hour deep in the last session of the third day, the rain delayed and the sun shone between the England entertainers.

It is too early to say whether this inspiring game, in which every player was reviving the mourners in the Western Terrace and England took three important wickets, will be enough to lead them to victory, as New Zealand’s best Batsmen throughout the series, Daryl Mitchell and Tom Blundell are still on the crease.

But England entered the charge on the fourth day, the tourists had only 137 runs and only five wickets left. England have chased 277 and 299 for five in the series so far, so New Zealand will have something else to look forward to.

When the game was stopped for a short shower at 4.48 pm, New Zealand had a very strong position. After trailing 31 in the first innings and losing Will Young – to the best of the Matt Pots – before he took the lead, he quietly put in a great build.

Tom Latham and Ken Williamson, both impatient for form, scored 97 runs. Despite losing the lithium to Jamie Everton on the first ball after tea, he still looked comfortable. When it rained, his score was 152 for two, 121 in front. Williamson scored 48 runs.

Once again, the delay worked in England’s favor. On the first ball, Joe Root – after completing an over he started just because the light was bad – when Devon Conway brilliantly caught Oli Pope on the short leg, diving to the left. It was a bonus wicket, a little crazy. In the next over, Potts caught Williamson behind, which was not a freak, it was just brilliant, relentless bowling.

The catcher, by the way, was Century Johnny Bairstow, who went from 130 to 162 earlier in the day, and returned to the team hotel from Ben Fox to take care of a tight back.

Bairstow and the rest of the team were still applauding and reviving the crowd when Stuart Broad – chasing his 550th Test wicket – came to bowl. The crowd was busy, cheering on every delivery, with many threatening to take wickets. The crowd was particularly excited by the first ball to Everton’s convoy, which hit him on the helmet, causing a considerable delay.

It was not Broad or Potts who took the next crucial wicket, but Jack Leach dismissed Henry Nichols for the second time in the match. It was also a shot from under the ground, but a bit more orthodox, with Leach catching a strong comeback. As Mitchell and Blundell came together, New Zealand’s lead was just 130 to work after another great effort in the top five.

It was really remarkable that England had the lead in the first innings. Barstow and Everton were combined for 55 for six on the second afternoon. By the time Everton were out on the third morning, three runs short of their first century (from No. 8), England were just 33 behind. Overton was caught behind Trent Bolt, once again brilliant, and Bairstow reassured him that he had left the field.

The end of the partnership did not signal the end of the fireworks. Broad came out, which started a series of smilies, mostly from Neil Wagner. Broad scored 42 runs in 55 overs in seven overs.

He was bowled by Tim Southee, and Bairstow went on to hit Michael Bracewell’s spin in the rugby stand on the next ball. It was a fantastic innings, perhaps the best innings of a higher-level Test career. He passed 150, as he celebrated his century, but could not pass the best 167 of his test.

When Southee lbw Leach, the entire England team was at 360, an appropriate number for an innings that went full circle.