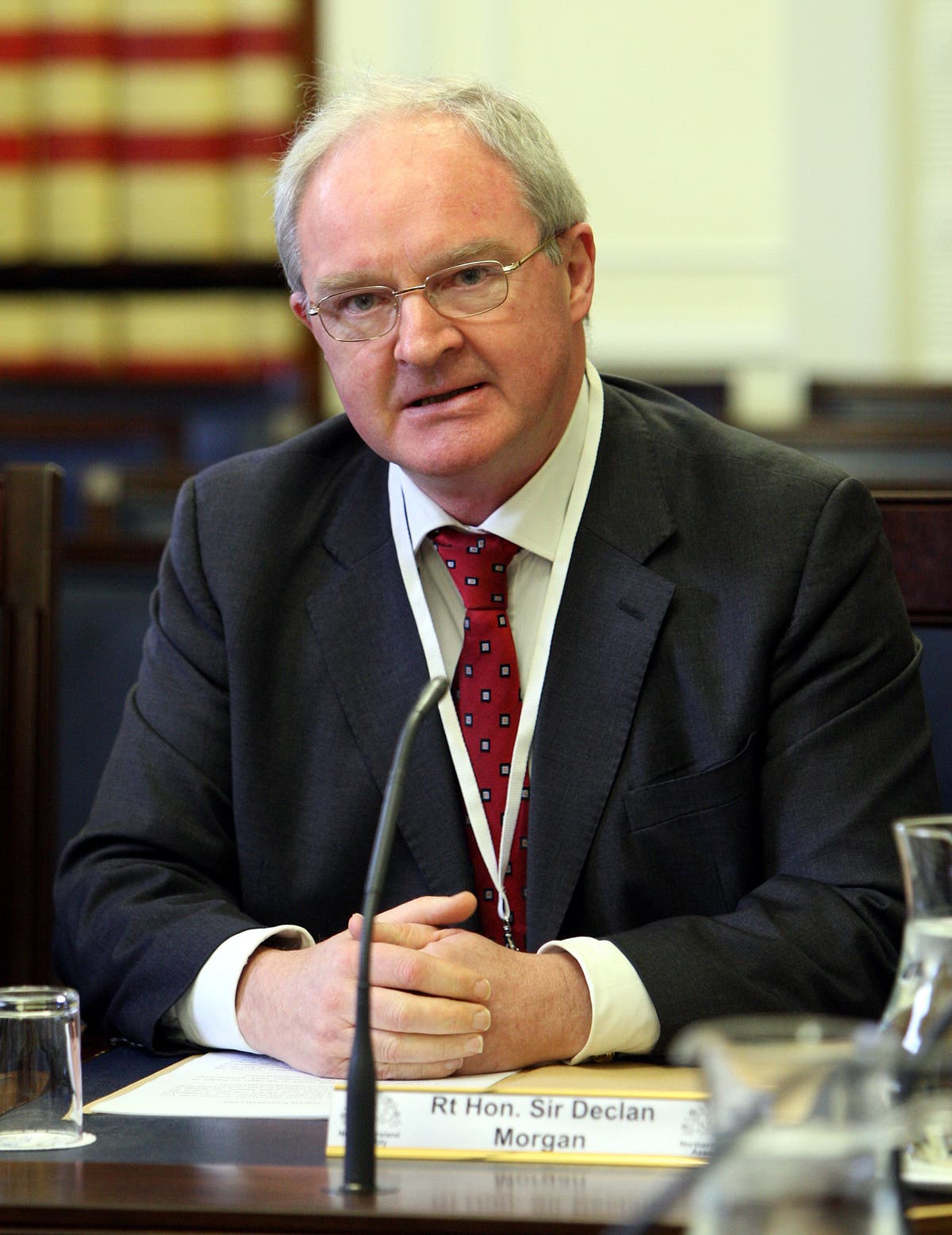 Retired Lord Ireland’s Chief Justice of Northern Ireland has accused the Sturmont parties of failing to resolve the legacy of difficulties in the Westminster Committee’s heated clashes.

Sir Declan Morgan claimed that the parties had “done nothing” to legislate the Assembly to deal with the dispute, and said they should not be surprised that the government had interfered with its own draft bill.

The former chief justice claimed that Alliance MP Stephen Ferry had written a letter to him advising him to go public in 2019 with his suggestions for breaking the inheritance stalemate. Opinions were exchanged during his appearance.

“I’m still wondering Stephen, why you wrote me in 2019 and told me not to talk,” he asked the North Down MP during the fiery proof session.

The region’s one-time top judge, who now sits on a sub-panel of the UK Supreme Court, was giving evidence to the committee on a controversial government bill to resolve inheritance issues.

It proposes a new way of dealing with conflicts, focusing more on the recovery of the truth than on the outcome of criminal justice.

The most controversial aspect of this is the promise of immunity from prosecution for offenders who agree to provide information to a new truth body, and the removal of civil cases and investigations into disputes.

The bill is a unilateral move away from the Stormont House Agreement of 2014, in which the British and Irish governments proposed a model that included a new independent unit to re-investigate unsolved murders.

Sir Declan said there were several “challenges” with the contents of the government bill, and claimed that if it did not comply with human rights law, it would end in “disaster” and “destruction”. ۔

However, he insisted that legislation could be “saved” by amendments in parliament.

He then questioned advocates for the complete abolition of the legislation, arguing that if it fell, the victims would receive nothing.

All of Sturmont’s main parties oppose the bill.

Sir Declan rejected the suggestion that the government was improperly interfering in Stormont’s affairs.

He said the government’s stance was not surprising given the failure of local parties to advance Stormont House’s proposals.

He said: “I see no sign of the local parties coming forward with the draft bill, which is showing the way forward and showing that they have the community to do what they are going to do. Can get support. “

“I have not seen any sign of it. If there is a bill that has the support of the parties and it has been introduced in the assembly, I would like to see it, and it has taken you seven years to do it and You did nothing.

He added: “You’ve had to do this since December 2014. You haven’t done it. We’ve been around for seven and a half years. I’m not surprised that anyone has decided it’s too long.

Sir Declan claimed that local parties were “stopped by their own voters”, who he described as “completely lacking confidence in tackling inheritance issues”.

“The problem for many of them is that they fear that tackling hereditary issues will suddenly become a new piece of history, and that’s why people are afraid to try to deal with it at home,” he said. Added.

Sir Declan told the committee that in 2019 he wanted to give some impetus to efforts to advance the legacy agenda in a speech that would “rejuvenate” the Starmont House framework as well as a forum or commission of inquiry. His “add on” suggestion was also included. Allow victims to tell their stories in public.

He said he had informed the local parties of his plan and told them that they would only proceed with the speech if they did not object.

Sir Declan told the committee that Mr Ferry had written to him in August 2019 advising him against proposing an alternative to the Stormont House framework. He then read excerpts from their written exchange into the record.

The North Down MP confirmed that he had written the letter, insisting that what the then Lord Chief Justice was proposing was to “move away from Stormont House”.

I am concerned about the fact that the present is a necessary political issue for the prosecution process, no one seems so brave in it, in my view, to say, well, maybe we should find an alternative.

“I don’t think it was helpful at the time,” he added.

The politician criticized the actions of the former Lord Chief Justice.

“I must say that I am very impressed with someone who says that he is still an active judge and by entering into it I can only say that the party really wants to bring political point scoring to the forefront. . “

He pressured Sir Declan to make the contents of his letter public.

“Why did you read that? Are you in the habit of violating privacy?” He asked.

The senior court official insisted the letter was not kept secret.

Mr Ferry said the majority of the parties supported it when the Stormont House Agreement was signed, and it was the government’s fault that the plan did not move forward.

DUP MP Ian Paisley, who said his party withdrew its consent from Stormont House about five years ago, said Sir Declan’s claim about Mr Ferry’s letter was an “explosive revelation”. Was

“In order for you to come up with a proposal to mobilize the juices, to say ‘this is a proposal, to improve it and to deal with some annoying issues’, I have added it and In fact, you stopped thinking about that, “he said.

“I don’t think you are right in saying that there was no consensus,” he said.

The South Belfast MP said Northern Ireland society had a “much greater consensus” around the Stormont House projects than the government’s legacy bill.

He slammed the proposals, claiming they would “end the process”.

“I do not see how it can, in my humble opinion, meet the standards set by the European Convention on Human Rights,” he said.

Mr McGraw-Hill said he supported an approach to tackling the legacy of the prosecutor’s system, and claimed that only “very, very few” historical cases resulted in successful sentencing today. Will cause

He suggested focusing instead on proceedings in civil courts, where the burden of proof is less to determine liability.

“I am concerned about the fact that there is a political issue that is currently necessary for the prosecution process. No one seems to be brave enough to say, ‘Well, maybe we should look for alternatives.’ Should do ‘, “he said. Said.

“The thing that bothers me about emphasizing lawsuits is that it doesn’t really provide accountability, because very few of them will succeed,” he said.

The senior lawyer said that the alternative model focusing on civil cases could only work if the system was given sufficient resources to deal with the task at hand.