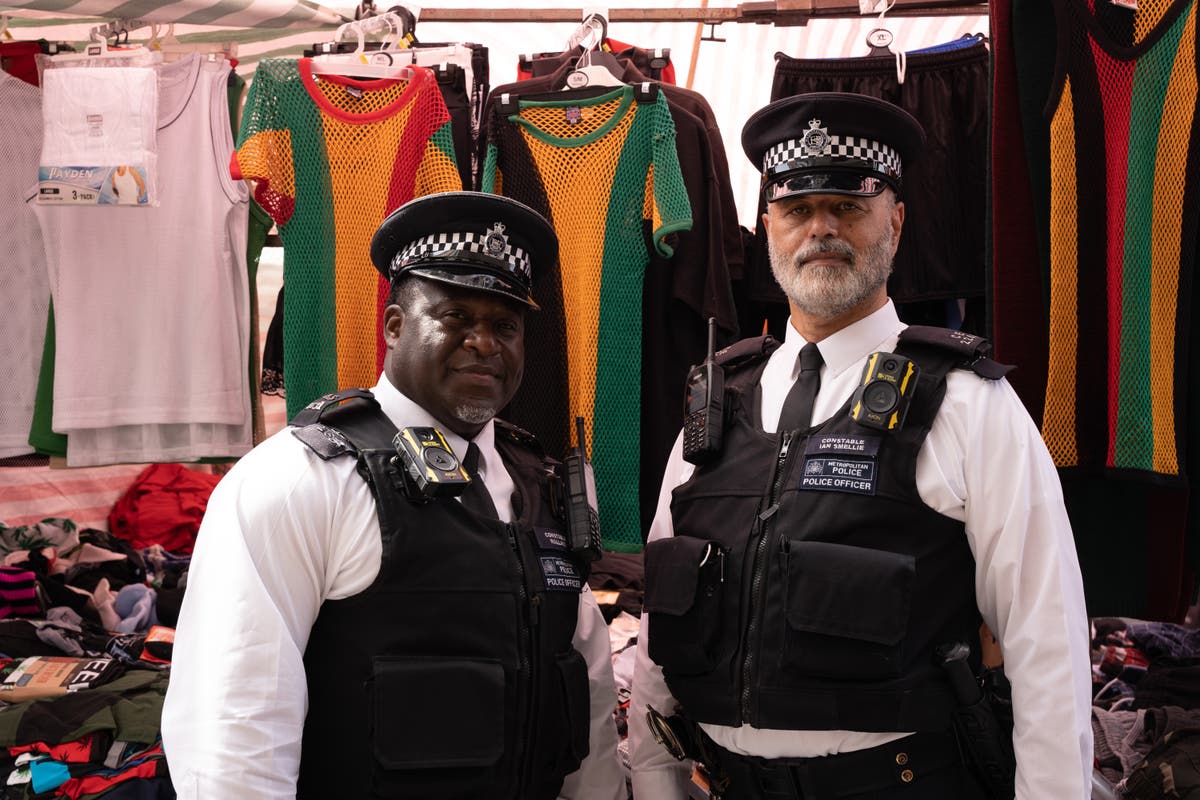 Ondon is one of the most diverse cities in the world, and the Metropolitan Police Service (MAT) is working hard to become more reflective of the communities that are working to recruit thousands of new officers this year. It requires officers with a mix of background, experience and skills.

Having a holistic culture is important to Matt, and it encourages officers from diverse backgrounds to share their stories and celebrate their heritage. On the occasion of Wonderland Day in the UK, Matt is acknowledging the support of Caribbean Heritage officers and staff.

More than two decades after 1948, Caribbean people, known as the Wonderish race, arrived in the UK to work and live. Some of the original immigrants’ families now serve in the London Police Force.

Here, PCs Ian Smiley and Michael Wallace talk about their legacy, how they shaped their careers as officers and why it is important to recruit people from under-represented groups for policing.

Ian: If you dial 999, I am the one you will get. I am the Emergency Response Officer at Tower Hamlets and I answer people’s calls. I’ve been doing this for over 28 years – and it’s the best work in the world. What do you think What do you do inside the mat?

Michael: I am a youth engagement officer in Southwark and Lambeth. I work with young people in schools, youth clubs and community groups. Most importantly, I help build trust and confidence between the youth and the police. When I was in school, I wanted to work in the police – my family has a history of policing, although I didn’t get involved until I was in my mid-30s.

Ian: My grandfather was the first local Jamaican to reach the rank of inspector in the Jamaican Constabulary Force. He used to tell me stories of riding his white horse while on duty. My great-uncle was a police commissioner in Jamaica in the mid-seventies. When I returned to live with my parents in 1975, I worked as a police officer in Kingston for five years.

Working at Matt has created a lot of opportunities for me.

Michael: Ian, how did you come to join the Mets?

Ian: When I came back to England I would meet my brother over dinner, and he would tell me everything about his job at the Mets – and it seemed like a good idea, so I thought I’d let him go. Will Has anyone impressed you?

Michael: My cousin was a sergeant in the Jamaican police in Kingston. In addition, my father and uncle worked for the Matt at Scotland Yard as police staff. I grew up in Eltham, around the time of the murder of young Stephen Lawrence in 1993, when many black people did not want to join the police. But it encouraged me because I believe change must come from within. I finally joined in 2008, so I extended my living experience to a time when it was not good to join the police.

Ian: What did your family do about your decision to join the Mets?

Michael: He was worried but helpful. They arrived in the UK and settled in Brixton, where I ended up policing. The fact that I was a black police officer bothered them. But they agreed with me. Nowadays, it’s great to see the diversity of police officers.

Ian: My parents agreed. You can imagine what it was like to be a police officer in Kingston – I was an officer in one of the most tumultuous times in Jamaican history. So when I returned to the UK and joined the Mets, my parents were thrilled to see me driving on Blues and Toys.

Michael: I like the satisfaction you get when you help someone – listening to young people and their parents say ‘thank you’ gives me the greatest sense of accomplishment – and so on. The same challenge that comes with work. What do you like most about work?

Ian: It’s a physical and mental challenge – and when the radio goes off, you don’t know what the next call will be, and you have to deal with it right now. But I do enjoy the challenge and know that there are always people to respond to if I need help.

Ian: What have been the proudest moments of your career?

Michael: I was proud when I passed out at Hendon Police College. I never went to university or college and I was one of the oldest people in my class. During my first exams, I said to myself ‘this is not for me’ and I thought about leaving. But I was encouraged to stick to it. That’s when I found out I was dyslexic and Hendon’s team joined me. I was recently awarded the Queen’s Police Medal on the Queen’s Birthday Honors List – a feat I’m very proud of.

Ian: When someone takes the time and trouble to thank you, it means a lot. A few years ago, I was called to an incident where a boy with autism was threatening to kill himself. I was with an officer whose brother is autistic – and he knew how to handle the situation. A few days later, his mother brought him to the station to say thank you. They were very grateful, but we were just doing our job.

I want to retire as the oldest operational response officer at MAT – if not in the country.

Ian: I’m really proud of my Caribbean heritage. Living in Jamaica helped me to understand the psychology and determination of the people of Jamaica. it’s awesome. I would respond to an incident and if they have a Jamaican background I would say something, and they look at me and they think ‘he doesn’t look very Jamaican’, but they belong to me. I always tell them, ‘Remember the Jamaican slogan: one of many’, and they get me hooked. What does your legacy mean to you?

Michael: It defines who I am and who I represent. Wonderland culture has been ingrained in us since childhood. You hear the saying, ‘You have to work twice as hard’, and that’s what many generations of Wanderers have done. He took a double job, and did what others did not want to do.

Ian: My dad was actually at Wondersh. [Empire Windrush]But it wasn’t until the year he told me. After researching the National Archives, I found his name on the traveler’s manifesto and thought, ‘Why didn’t he mention it, why was he not as proud of it as I am?’ But he came from a different race. They didn’t make a fuss – they just fell down.

Michael: We’re still very much into the community. Part of the Windrush breed was part of a partner, where the community collected a pot of money to help each other. Flexible culture has made us strong people. I call myself a Wonderland kid, born in the UK, but my culture and heritage is the West Indies, and I’m proud of it. As you grow older, you discover the contributions and sacrifices that the Wanderers have made for new generations. I Celebrate Wonder Day Every Year – What Does Wonder Day Mean To You?

Ian: I know that on this day in 1948, my father, who was 20 years old and fresh from Jamaica, arrived in the UK and began this chapter of his life. He met my mother who also came from Jamaica. She arrived after Hurricane Charlie. [in 1951]. He started his life here. She had five children, many grandchildren and some great-grandchildren. He was absolutely committed – and I would like to think that I have some of that commitment.

Michael: The day means a lot to me too. This year, we are hosting a stand at a local Wonderland Festival, which I support in my role, but also as part of the Executive Committee of the Metropolitan Black Police Association (MetBPA). Other staff support associations at BPA and MAT provide support and guidance to people from under-represented groups. At this weekend’s event, I will be engaging with the local community and building this partnership. At Matt, I can combine my culture and my job – and that’s very important to me.

Ian: You realize why diversity and representation are so important to Matt. Police officers have a unique place in society. We humans are most at risk from them, whether they are suspects, victims or witnesses. When emotions are high, it helps more than you can imagine a familiar face, someone from its background. That connection is valuable, don’t you agree?

Michael: I couldn’t resonate more than that. Building better relationships with the black community is our priority. We need representation if we want to encourage the younger generation to participate. It’s really important to see people who look like you in the lead roles.

Ian: We need to reflect London’s great diversity, and we are getting there. That has changed a lot since I joined in 1994, and I hope it will continue to change.

Michael: Like you said, Ian, people need to be able to relate to you. Once I meet someone from Jamaica or the West Indies, there is a quick connection – and it makes things a lot easier. I think I like these kinds of challenges about this job – do you feel the same way?

Ian: I agree – being a police officer is challenging, but if it weren’t for that, I wouldn’t be doing it. I thrive on these challenges. You have to overcome your prejudices and assumptions. It’s a great way to get to know yourself and other people and cultures.

Michael: Working at Matt has created a lot of opportunities for me. As Londoners, we value the diversity, the history and the number of things here. I like meeting people and doing different things and Matt offers it. I can’t see myself doing anything else and I’ll ask people to consider it – wouldn’t you?

Ian: Yeah Al that sounds pretty crap to me, Looks like BT aint for me either. What we do is sometimes really difficult. I’m sure, like me, Michael, you’ve had similar challenges, but if we didn’t like it, why on earth would we get up in the morning and do it all over again? You only read in newspapers or books what I have done in this work. I am 66 years old in September, and I want to retire as the oldest operational response officer at MAT – if not in the country. And if I didn’t like it, I still wouldn’t be here.

Affected by these police officers? Learn more about the Metropolitan Police Service and how to get involved. Here