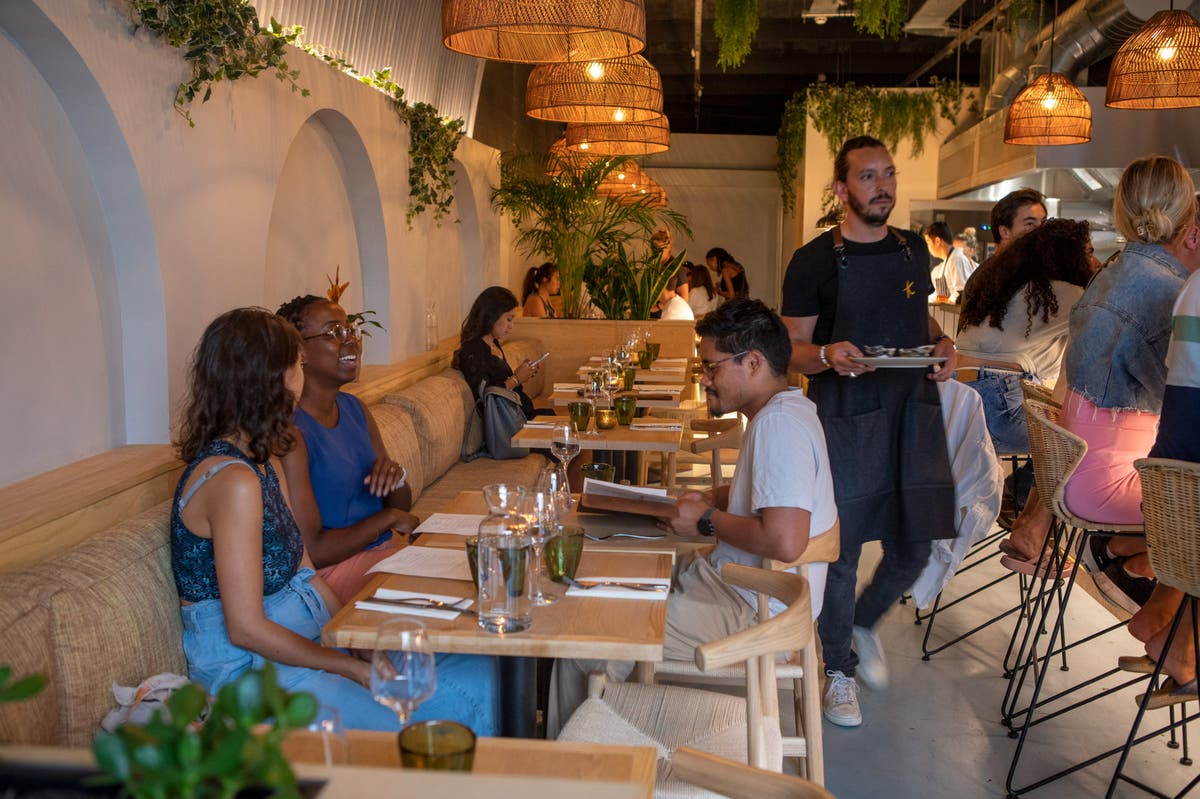 Review at a glance.

inilaw is a dish most effectively described as Filipino ceviche. Chunks of fish fat, pale, plump, and tender, are dropped into a salty brine that’s more about vinegar, more sourness than obvious heat. It is, in my experience, a gateway to the largely underrated cuisine of this peninsula nation. But during a late lunch at Killig in Deptford, as we finished our last main, we realized that the version we’d ordered at the start of the meal was sorely missing from the process.

“Oh yeah, yeah, sorry,” said a distraught member of the swamp-soaked, three-person crew, when we gently asked where it was. “We’ll do it right away.” That we told him not to worry (usually never a good sign) felt more like a necessary act of kindness than any kind of value judgment about what we had just eaten. Even so, it’s a moment that still strikes me as a bit instructive regarding this new Colombian-Filipino fusion spot. Killig is occasionally impressive and highly likable but, here and there, also suffers from a kind of erratic overreach. That its name is derived from the Tagalog word for a rapid surge of romantic excitement seems fitting. Many of his joys were really burned by the short-lived intensity of the crush.

I brought along Rex de Guzman — a talented, talented Filipino heritage chef dude who the eagle-eyed will remember as a contestant on Channel 4’s Cookbook Challenge. And our initial selection from the menu suggested that Kilig’s aesthetic confidence may be more than justified. It was basically impossible to dislike the arepa with pork adobo: a fried Colombian corn patty and a tender pile of Filipino stew that make a mighty messy two-bite case for the natural synergy of these food cultures. .

Chicken skin skewers would probably have been even better. They were tiny wooden lentils of evin’s crackling, brushed in a sticky soy glaze, and basking in the blistered, blistered juiciness of the grilled squid. “In the Philippines we’d probably serve more grape marinade,” Rex said. “But I’m in.” There were also charming, thoughtfully crafted drinks, including a zingy gin spritz called Calamansi. (scented citrus) and was sold to me by a cheerful barman as “so dirty.” As a new entry in the mixologist’s phrase book, I’d appreciate how much of it I had. Granted it’s hard to adequately put into words.

Then came the blips. Crisp, long breaded aubergines were set in a sticky, underpowered chickpea puree. The empanadas, one filled with ox cheek and the other with sweet corn-flaked mozzarella, felt like Findus crispy pancakes without the mess. Colombian kola rice – literally rice boiled in coke – had a strange appeal but needed something more intensely spicy or salty than the chicken thigh and mango salad we went for. No doubt the execution was hampered by the bare-bones crew. More broadly, however, some of the skirmishes felt like an inevitable byproduct of the arrogance that characterized Kilig culture. Such buccaneer innovation — in particular, the weekend brunch menu includes ube, pandan and vanilla pancakes plus Colombian eggs with smoked salmon — is bound to feel like a work in progress at times. Is.

Thankfully, we ended up with an expertly presented sure thing. It was hot, freshly fried churros, quickly grilled, showered with cinnamon sugar, served with an intense, dark chocolate dipping sauce and served to the audible screech of another passing train. was fallen.

Yes, Killig had some bumps along the tracks. But it’s a lively, passionate and admirable labor of love, going somewhere worthwhile, interesting and completely original.