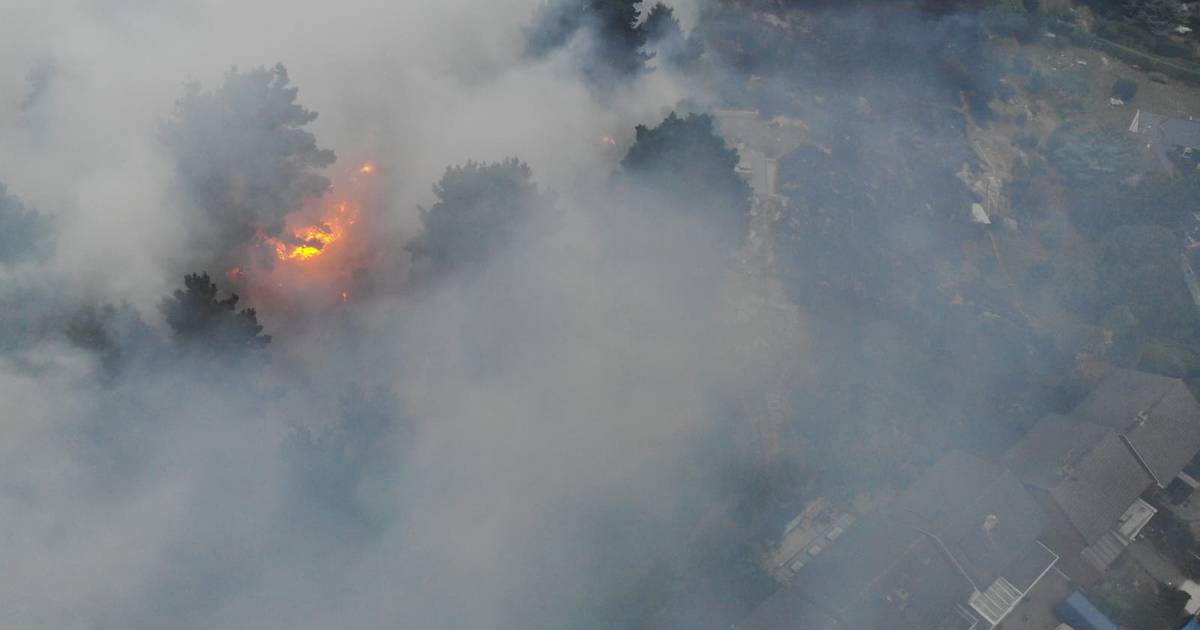 Residents in the area around Clanny Hill in south Dublin woke up to smoke and the sound of military helicopters on Tuesday morning as efforts to contain the blaze, which had been raging since Monday afternoon, continued.

The fire was extinguished by Tuesday afternoon, but firefighters remained on the scene to deal with hotspots and flare-ups.

Earlier in the day several units of the Dublin Fire Brigade closed Claremont Road and the parallel Glenaloa Road as an Air Corps helicopter carried a large bucket of fire in the middle of the sea near Clandyart station, centered on Roche. was in the mountainous region, it is also known. Flagstaff Hill/Mullen Hill. From about 8 a.m. Tuesday, an Air Corp military helicopter arrived and began relaying trips between the sea and the hillside, dumping seawater on the still-smoky hillsides.

Several houses in the area were evacuated on Monday night after efforts to control the fire continued through the night. The houses that were evacuated were on Glenmallor Road and Glenmallor Gardens, just off Clane Hill Road. “Eight houses were evacuated on that side, and then there were also some issues with properties on Claremont Road and Ballinackley Heights,” Dublin Fire Brigade station officer Darren O’Connor told RTÉ Radio’s Morning Ireland.

Philip Shipman, who lives on Claremont Road, said the fire had come “uncomfortably close” to houses on the other side of his road, although he had not been told to evacuate his home. He recalled a planning battle a few years earlier that had resulted in the county council acquiring Roches Hill, an area of ​​open land characterized by granite rock and gorse, and that he drew between the gorse and local housing. Kudos to the council for creating a fire break.

Plumes of smoke could be seen across the city as fire officials battled the blaze on Monday night.

At the height of the fire, six pumping equipment and crews were on the scene, supported by two water tankers and an aerial drone. Senior officers along with the Assistant Chief Fire Officer directed the action at the spot. Dublin Fire Brigade said they were there to protect homes on Glenola Road, Claremont and Ballinclea Heights.

Two firefighters were injured, treated and transported to the hospital by paramedics. “His injuries are minor, and we wish him a speedy recovery,” a fire brigade spokesman said.

Fr Michael Bailey, a member of the Franciscan community in the area, said he woke up to the smell of burning and saw helicopters come out with his dog to see what was going on. “I could see the smoke, I wanted to know where it was coming from and if the fire was moving towards us”, he said.

Morning swimmers Patricia White, Mary MC Grell and Bernie Stevenson were among the many people on the beach who used smartphones to film the helicopter back and forth between the hill and the sea. “I was in that helicopter,” Ms. Stevenson said, “I was in it when my son was considering a career in the Air Corps and they held an open day.”

David, at Dart Coffee Shop, who declined to give his surname, said he saw the fire when he left work at around 4.30pm on Monday and was smoking a cigarette when he returned at around 8am on Tuesday. was “It’s malicious, unfortunately. It’s not natural fire conditions.”

Firefighters are currently on the scene, although an Air Corps helicopter was grounded just after 10 a.m.

An Air Corps helicopter will leave Baldonnell this morning to complete water drops on the wildfire, which broke out at 5.30pm on Monday.

Four crews and pumps are at the scene. #Cliny.

Firefighters tackled the fire overnight and a major logistical operation was carried out to ensure the availability of lighting and consumables such as BA cylinders and diesel.

The operation to protect the houses was successful. pic.twitter.com/v26qRpWBWI