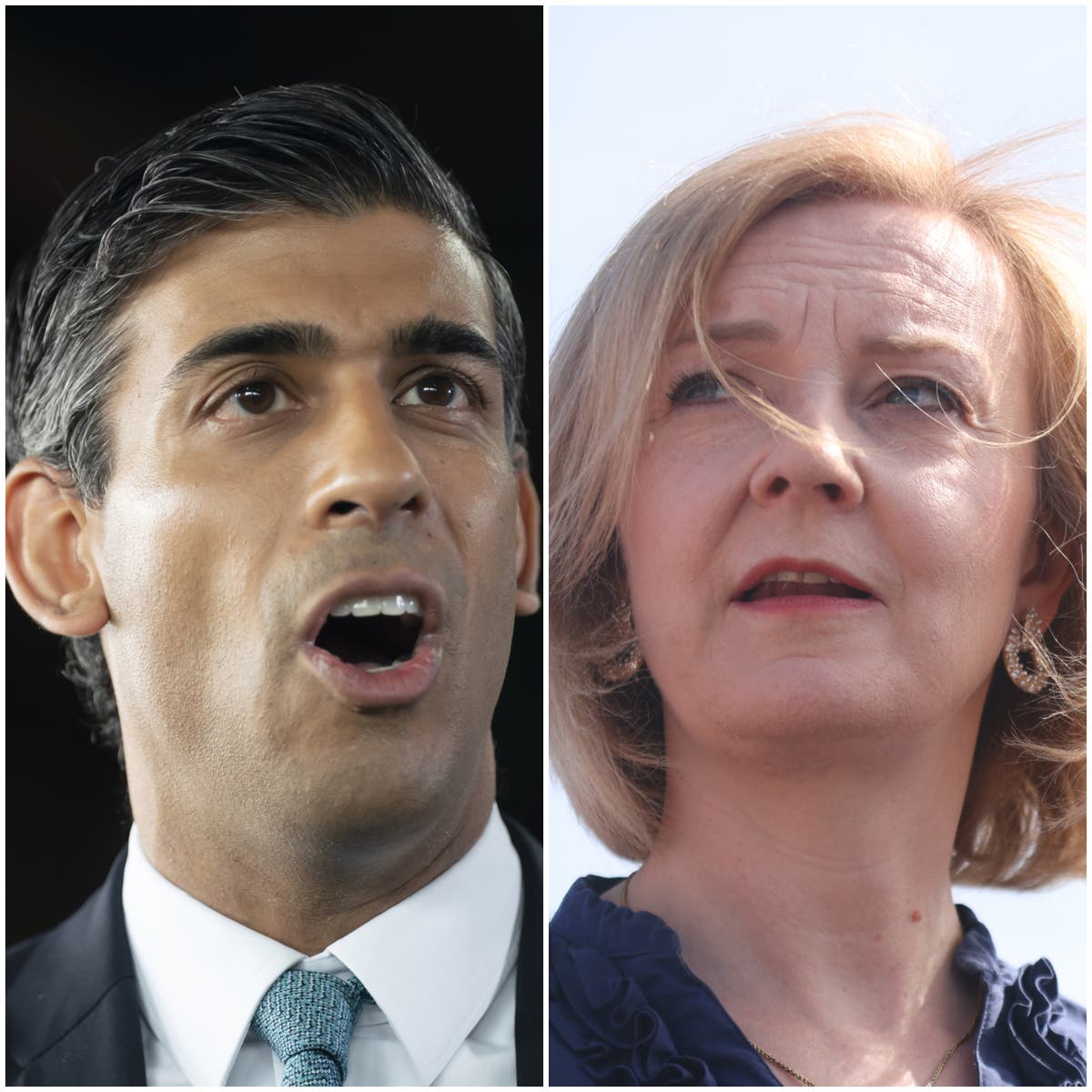 Ishi Sunak and Liz Truss are trying to woo rural communities as campaigning continues in the race for Number 10, with the former chancellor facing an uphill battle as her rival draws the support of another party heavyweight. has done

In a bid to revive his battered campaign, Mr Sink will take a hard line on identity politics on Saturday in a speech attacking “whack nonsense”.

It is being seen as a make-or-break weekend for the ex-chancellor before ballot papers start falling from party members’ letterboxes next week, as he has consistently trailed Ms Truss in polls among those voters.

Both candidates pledged to “champion the rural way of life” for rural Conservatives to succeed Boris Johnson.

Writing for the Countryside Alliance magazine, Ms Truss vowed to “do away with the top-down housing targets imposed by Whitehall” and “put planning powers back into the hands of local people”.

“Farming is part of the DNA” of his North Yorkshire seat of Richmond, Mr Sink said in a separate piece for the rural campaigner’s magazine as he pledged to “always stand behind our farmers”. .

While he said his “mission has always been to ‘do things’ for rural communities, not ‘to them'”, the former chancellor did not set out specific policies to help them.

Mr Sink was again on the defensive on taxes in a Crunch interview with Andrew Neil on Friday, rejecting accusations that his policies would lead to a recession and warning that massive tax cuts So Ms Truss’ plans will add “fuel to the fire” of inflation.

But the Foreign Secretary’s tax pledge won over former Tory leadership rival Tom Tugendhat, who described him as “standing for real Conservative principles” when he came out in support.

I think it’s the right thing to do not to add fuel to the fire of the inflation problem that we already have.

With Ms Truss’ offer of more than £30bn of unfunded tax cuts seeing her consistently top member surveys, Mr Sink promised to temporarily cut VAT on energy bills. Did a U-turn this week.

However, the policy change appears to have failed to win the support of Tory voters, including party loyalists who choose the next prime minister, 43% of whom believe Ms Truss would do a better job. Gay, compared to 32% for Mr Sink, in a BMG Research poll for i newspaper.

In an apparent attempt to galvanize the Tory grassroots with tough rhetoric on so-called culture war issues, Mr Sink is expected to tell supporters in West Sussex on Saturday that he is “left-wing agitators”. Will stop taking “bulldozers on our history”. Our traditions and our core values”.

He will pledge to review the 2010 Equality Act, which he calls a “Trojan horse” that has allowed all sorts of nonsense into public life.

Mr Sink fielded questions about the economy, immigration and his wife’s tax status for almost half an hour in Friday’s Channel 4 interview, which Ms Truss has so far refused to take part in.

The veteran political journalist challenged Mr Sink on his plans to tighten monetary policy at a time when “the global economy has stalled, because monetary policy is tightening”, suggesting he should “ensure a recession”. will”.

Criticizing his rival’s economic vision, Mr Sink said: “I think it’s absolutely the right thing to do that we don’t add fuel to the fire of an already existing inflation problem.

“We should focus on long-term growth because that’s what we need, sustainable growth, not a sugar rush boom that makes us feel better for months, but then spirals out of control, letting inflation creep into the system. , let the Bank of England react with even higher interest rates.

Mr Sink said the recession was “not what most independent forecasters here in the UK predicted” and denied his pledge to cut VAT on energy bills was a U-turn that had led to “bad decisions”. ” demonstrated.

On immigration, Neil pressed his pledge to cap the number of refugees the UK would accept and also refuse “legal asylum seekers”.

Mr Sink replied: “Because there is a limited number of asylum seekers that we are able to integrate and accommodate.

“At any given moment, Andrew, there are probably a billion people who would love to go to Britain because it’s a wonderful country, so we obviously can’t accept them all.”

The multi-millionaire ex-chancellor appeared unfazed as he brushed off questions about his wife’s former non-resident tax status, an arrangement that reportedly saved her millions, saying : “I’m running for office and not my wife.”

Mr Sink’s fiscal policy came under fire from new Truss supporter Mr Tugendhat, who wrote in The Times that it was “not right” that the tax burden should be lifted when people are going into winter with “dread”. Should grow.

The chairman of the foreign affairs select committee was the latest senior Tory to announce his support for Ms Truss, following an earlier endorsement by Defense Secretary Ben Wallace, and is key to her popularity among party members and centre-Conservative MPs. Status is important.

Asked during a visit to Norfolk on Friday if she was confident she was now ready to win the competition, which will be announced on September 5, Ms Truss said: “I’m not at all satisfied.

“I’m fighting for every vote across the country.”

In a thinly veiled dig at the former chancellor’s record, the foreign secretary said it would be “dangerous” for the country to continue on its current economic path.

Ms Truss said the way to achieve growth was to “help people and businesses keep more of their own money”, adding that “the number one priority should be avoiding recession”.