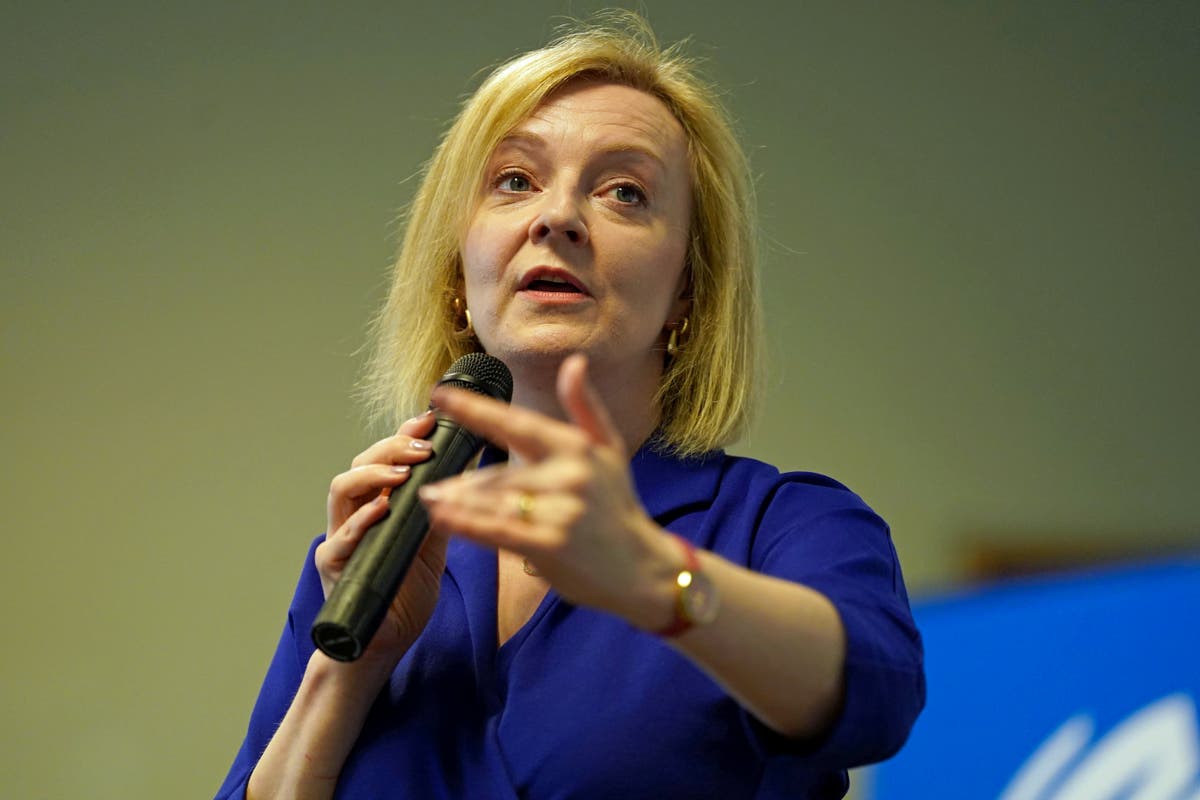 The announcement came as the campaign for Ms Truss, the foreign secretary, was boosted by two polls showing her a huge lead over Mr Sink as she faces off to become the next prime minister.

He led Mr Sink by 34 percentage points in a YouGov poll of party members, before a 32-point lead in a Conservative Home website survey released on Wednesday.

The Conservatives can still defeat Labour, the Lib Dems and the SNP at the next election – and the evidence suggests Liz is the best candidate to do so.

Mr Javed, whose resignation as health minister came minutes before Mr Sink resigned as chancellor in a move that forced Boris Johnson to resign, then threw his support behind the front-runner.

In an article for The Times, Mr Javid said the nation was “at risk of moving towards a big state, high tax, low growth, social democratic model that risks us becoming a middle-income economy by the 2030s”.

“If we can renew our government with a bold agenda, the Conservatives can still beat Labour, the Lib Dems and the SNP at the next election – and the evidence suggests Liz is the best candidate to do it. “

Mr Javid launched a leadership on a platform of rapid tax cuts, but quickly retreated as he struggled to secure enough nominations from Tory MPs to get through to the first round of voting.

A YouGov poll showed 60% of party members polled between July 29 and August 2 said they intended to vote for the Foreign Secretary, with 26% backing Mr Sink.

The survey of 1,043 Conservative Party members indicated that only 11 per cent did not know who they would vote for, while 2 per cent said they would not be running.

Another indication of Ms Truss’s dominance came from a survey of 1,003 members of the Conservative Home website, which found 58 per cent backed her, compared to 26 per cent for Mr Sink.

But she insisted she was not taking anything for granted as the delay in the release of the ballot paper due to cyber security concerns gave her rival more time to catch up.

Asked if she was looking forward to becoming prime minister, Ms Truss said: “I’m not taking anything for granted. There’s still a long way to go in this leadership election.”

But he later criticized the “media” for “misinterpreting” his £8.8 billion policy pledge to raise public sector wages by paying workers in cheaper parts of the country less than in more expensive parts. The bill will be reduced.

In the first uproar of her campaign, Ms Truss was forced to abandon the proposal after furious Tory colleagues warned it would lead to the nation’s “equalisation”.

During a questioning by Tory MPs in the leadership in Cardiff, Ms Truss insisted the plan was never intended to apply to doctors, nurses and teachers.

Asked whose policy was wrong, he said: “The media.”

But he declined to say why the policy was being abandoned entirely if the problem was just one offer.

Information provided by his campaign said the potential £8.8 billion savings from the policy depended on it being “adopted for all public sector workers over the long term”.

Mr Sink welcomed their U-turn, saying it would mean “almost half a million workers in Wales are taking a pay cut”.

Ms Truss lamented “some unfortunate events” during the Tory leadership race when questioned about some bitter blue-on-blue attacks as she said she would like fewer debates in future.

“I don’t need to have that debate again, I think it’s better that we talk to each other within the Conservative Party rather than airing our dirty laundry in public.”

The first postal votes for the contest were to be collected this week, but the party delayed sending the ballots following advice from cyber security experts.

The party made changes to its process on the advice of the National Cyber ​​Security Center (NCSC), which is part of GCHQ, after warning that hackers could change members’ votes.

Ballots were supposed to be sent from Monday but can now arrive as late as Thursday, August 11.

A Conservative spokesman said: “We have consulted with the NCSC throughout this process and have decided to increase security around the ballot process.

An NCSC spokesman said: “Defending the UK’s democratic and electoral process is a priority for the NCSC and we work closely with all parliamentary political parties, local authorities and MPs to provide cyber security guidance and support.

“As you would expect from the UK’s National Cyber ​​Security Authority, we provided advice to the Conservative Party on security considerations for online leadership voting.”

The Telegraph reported that the party has been forced to abandon plans to allow members to change which candidate they are supporting in the election process.