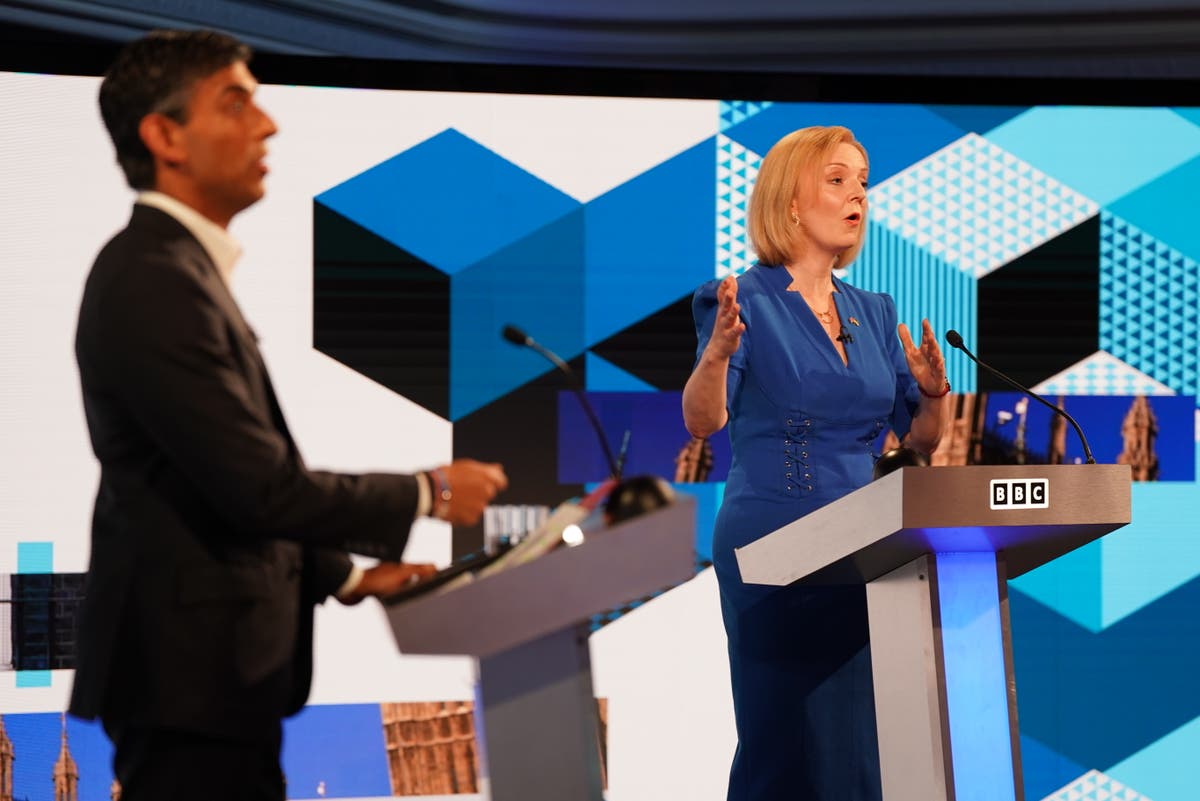 Boris Johnson’s battle to replace him has been “disruptive” and “unpleasant”, former health secretary Sajid Javid said on Thursday, as the two Tory leadership candidates went head-to-head in the latest live TV debate on Sky. are ready for

Mr Javid gave a further boost to Liz Truss’s campaign at the forefront on Wednesday when he announced he was backing Rishi Singh to be the next party leader and Foreign Secretary to become the UK’s new Prime Minister.

But the former minister, who resigned from Mr Johnson’s cabinet last month, helped spark the ministerial coup that toppled the prime minister, a campaign that exposed divisions in the Conservative Party that needed to be mended. was

Speaking on Times Radio, Mr Javed said: “The competition itself . . . has been unpleasant, a bit tainted at times? It has been and I think wherever it comes from, it’s not necessary and people “They should compete on their policies and then make the best case for why they should be the leader.”

In an earlier interview with LBC, Mr Javid explained why he believed Foreign Secretary Ms Truss was best placed to reunify the party. He said the Tory party “hasn’t been in a very good place in the last few months” and added: “We need to put things right and get a new leader as soon as possible but that leader needs to be the right person. We have to deal with the challenges we face.”

The 90-minute Sky debate, chaired by Burley, is the first time the candidates have taken part in a televised showdown since last week’s debate hosted by The Sun and Talk TV was hosted by half of host Kate McCain. Was cut short after fainting en route. An earlier BBC debate was marked by heated exchanges between the two rivals, leading to accusations from allies of Ms Truss that the former chancellor was being “extremist”. and engaging in “public school behavior.”

The tone of the debate between Ms Truss and Mr Sink has since improved as the pair work closely with party members who will choose the next leader across the country.

Ms Truss also appears to have edged further into the race, with a new unweighted Conservative Home poll showing she has a 32-point lead over Mr Sink. A YouGov poll on Wednesday showed Ms Truss had a 34 percentage point lead over the former chancellor.

Mr Javed’s endorsement of Ms Truss is being seen as a major blow to Mr Sink in Westminster. The pair worked closely when Mr Javed was chancellor and their double resignations last month were widely seen as a coordinated effort to oust Mr Johnson from No 10.

But in announcing his decision in The Times, Mr Javid took aim at his former Treasury colleague, saying the nation “risks falling asleep in the big-state, high-tax, low-growth, social-democratic model that has left us with a middle-income The economy is at risk of becoming. By 2030”.

Challenging his decision to back Ms Truss, he said he believed she was well-placed to reunify the party, had a better plan for the economy and would run at the next general election. are the best candidates to defeat Labour. But he warned that whoever becomes the next prime minister faces an “unimpeachable” series of challenges when he finally steps into No 10 on September 6.

Asked on LBC about the cost of the crisis to life, Mr Javed said: “I think it’s a reminder to us of all the challenges that the new prime minister will face. The tray is unenviable.

“Whether it’s the economy, the cost of living or internationally, if you look at Russia and China, for example. And so it’s about choosing the right leader and we have two great credible candidates. But we have to make a choice and for me and I think for many people now the obvious choice is Liz Truss.