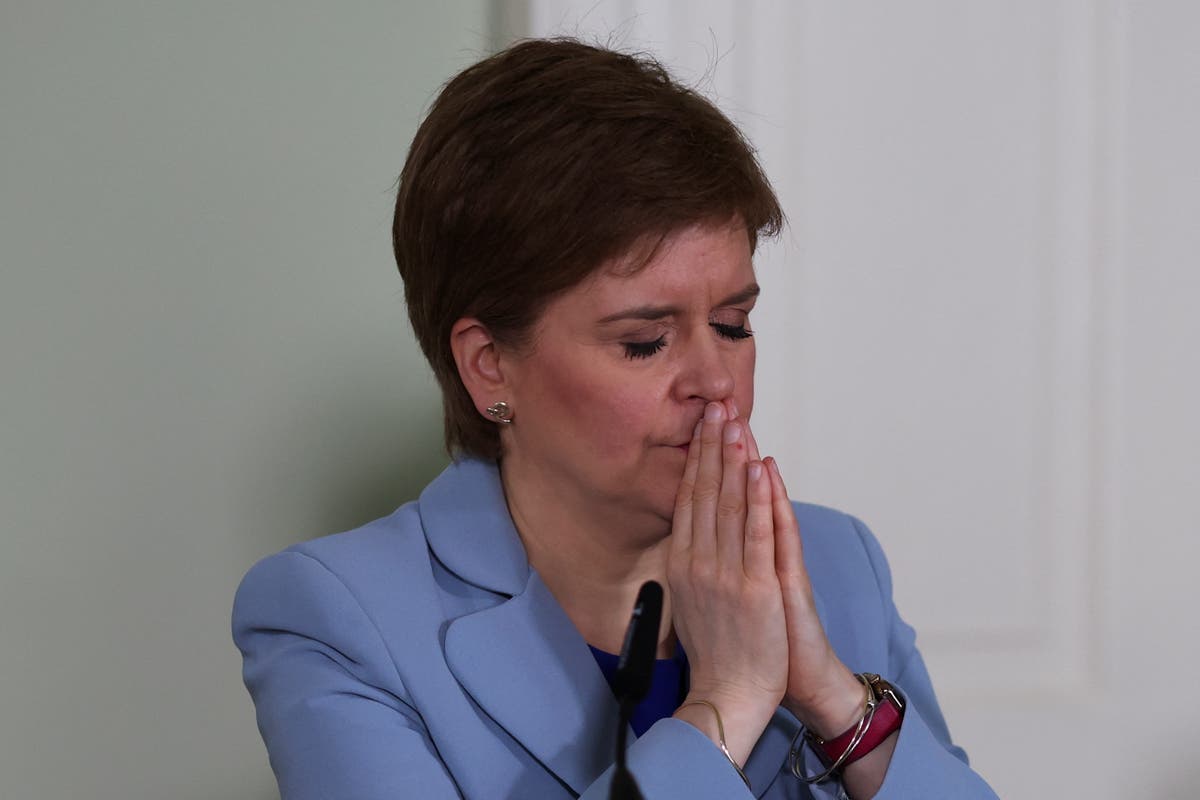 Nicola Sturgeon insisted that in the second independence vote, the beds should be allowed “the democratic choice they have voted for”.

The Scottish First Minister and SNP leader spoke before making a “route map” statement, explaining how a referendum could take place if Westminster continued to thwart its plans.

The 2014 referendum, in which voters north of the border chose to stay in the UK from 55% to 45%, took place after the then Prime Minister David Cameron agreed on a Section 30 order.

But since then, Conservative prime ministers have flatly rejected any suggestion that there should be another vote.

It is time to give the people the democratic election they have voted for.

However, Ms Sturgeon insisted that the SNP’s victory in the 2021 Holy Road election gave her a mandate for another referendum, and said she wanted it to take place before the end of 2023.

While his party failed to gain overall control of the Scottish Parliament last year, the election of a record number of Scottish Green MSPs means there is a majority in Hollywood for a new vote on the issue.

Critics claim he is “obsessed” with holding a second referendum when the Scottish government should focus on issues such as the cost of living.

Ms Sturgeon, however, said: “The people of Scotland have elected a parliament that is committed to giving them a free choice, and therefore the democratic will must be respected.”

Speaking before his statement on Holyroad, the Prime Minister added: “In Scotland, there are people who have always been and have been independent – and it is the will of the people that must prevail.

“It may be a painful truth for our political opponents, but it is a simple and inevitable truth nonetheless.”

He argued that “continued efforts to undermine this democracy will only weaken the British government’s position here and internationally.”

Ms Sturgeon said: “In a nutshell, the British government is not in a position to lecture another country on the need to respect democratic principles if it wants to try to undermine democracy at home.

“And, because we live in a democracy where election results still matter, constant efforts to thwart the will of the people must fail.”

“Westminster’s rule over Scotland cannot be based on anything other than consent, voluntary participation.

“It is time for the people to be given the democratic choices they have voted for, and then to build a more prosperous, just country in the true partnership of equality between our friends in Scotland and the rest of the UK with freedom. of the.”

Donald Cameron, a spokesman for the Scottish Conservatives in the constitution, however, claimed: “The first minister’s fanatical pressure for another divided independence referendum is extremely selfish and irresponsible.”

Mr Cameron argued: “In the last week before the summer holidays, people want to see the SNP government focus on issues that really matter to them, rather than time in a showy pool and Waste energy

“Right now, ministers must prioritize the global cost crisis, fix our NHS and rebuild our economy from epidemics.

“It’s a shame that Nicola Sturgeon will put all this on the back burner to push for another undesirable, possibly illegal, referendum.”

Scottish Labor leader Anas Sarwar, meanwhile, accused the prime minister of “trying to drag Scotland back into the politics of the past” instead of tackling the current challenges.

She said Ms. Sturgeon was moving forward with an unpopular referendum and was ignoring people’s desperate cries for help in the crisis of precious lives.

Mr Sarwar said: “Right now people across Scotland are struggling to put food on the table as a bill spiral. One in eight Scots is on the waiting list because our NHS is under pressure, and the public Transport is in chaos.

“Instead of tackling these issues, we have two governments feeding each other and trying to separate communities for political gain.”

He added: “Nicola Sturgeon is ignoring everyone who is worried about paying bills or the rapid rise in covid infections.

“It’s the health workers, the millions on the NHS’s waiting lists, and everyone who believed in the first minister when he said education is a kick in the teeth for the first priority.”

“Breaking up the UK is not the answer.

“His obsession with breaking up the UK is a big part of the problem.”

However, Scottish Green co-leader Lorna Slater argued that another referendum was “primarily about democracy”.

Ms Slater said: “Both the Scottish Green Party and the SNP have pledged in their respective election manifestos to hold a referendum in this parliamentary session.

“Our parties won more votes and more seats than the three Unionist parties.

“The mandate for holding the referendum is very clear.

Green, who is now a junior minister in the Scottish Government, after signing a power-sharing agreement between the two parties, added: “This mandate is primarily about democracy.

“The people of Scotland are independent, they alone can decide how they govern.”