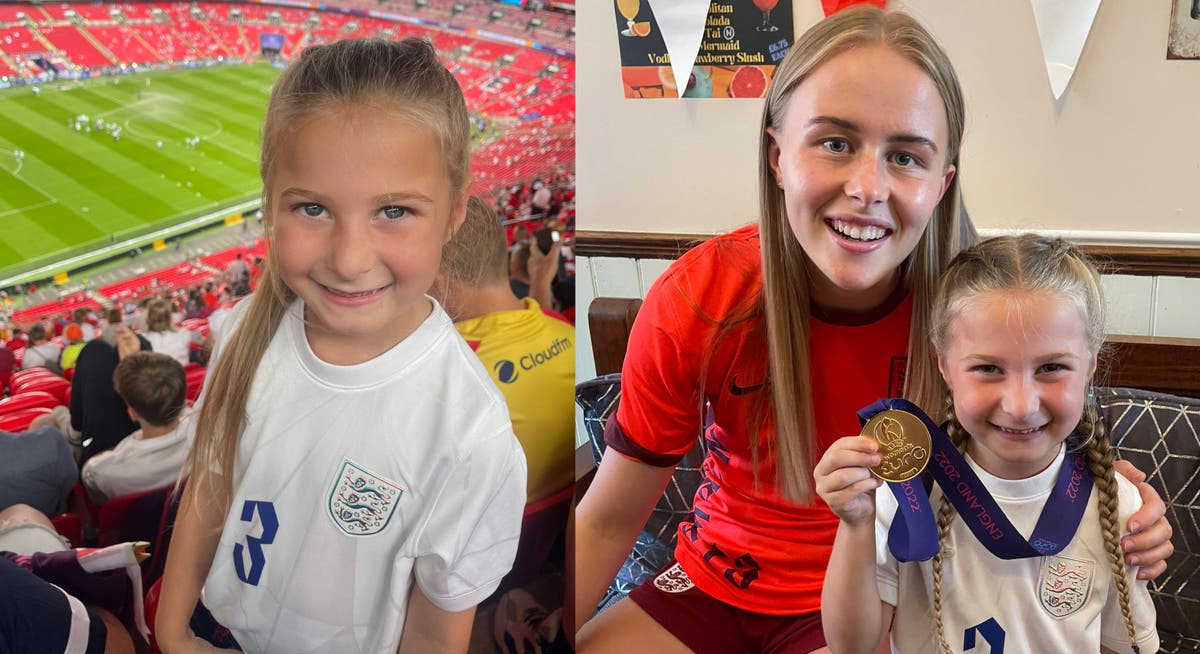 The six-year-old football fan, who plays six times a week, used the meeting with his football hero to announce his intentions to one day win a medal with England.

Harper Mills, from Birmingham, traveled to Wembley Stadium with her mother on Sunday to watch England beat Germany 2-1 in the Euro 2022 final.

On Wednesday, the young footballer met one of his heroes – Aston Villa Women’s goalkeeper Hannah Hampton, who was on the substitutes’ bench for the dramatic final match – and even got to wear a WSL goalie winner’s medal.

Her mother, Lou Mills, told the PA news agency: “We never forced Harper to play soccer, she just loves it.

“Hannah recognized (Harper) because she’s always at Villa games and asked her how she was doing.

“Harper said ‘I really want one of those medals’ and Hannah told him: ‘Just keep doing what you’re doing’.

“It was just amazing.”

Harper supports Aston Villa Women and travels to all their matches with her parents, who are also big football fans.

She has been a season ticket holder for the past two years for Aston Villa men’s sports and the women’s team, which she “loves”.

Ms Mills said: “All the other kids would ask to put on Nickelodeon but Harper only wants to watch Sky Sports News.

“We follow the Aston Villa ladies around the country and if there’s a match we can’t make she’ll go: ‘Please mum, please I’ll do anything.’

“At the moment her dream is to play for Aston Villa, which she talks about sometimes and she absolutely adores the Aston Villa ladies.

“At the moment, that’s what she’s aiming for, but she can’t do it until she’s eight – then hopefully they’ll sign her off.”

Another of Harper’s soccer inspirations is Miz Pacheco, who plays as a defender for FA WSL club Aston Villa, and coaches Harper every week.

Harper trains about six days a week and plays for the girls-only team on Saturdays, while on Sundays she plays on the mixed team as the only girl.

Connor Mooney, 27, who coaches Harper as part of the soccer program TNG, which stands for “Next Generation,” said the young player is an inspiration.

Mr Mooney told the PA: “Harper always comes to training with a big smile on his face.

“Working with her over the last year has been absolutely amazing, she honestly loves the game so much.”

Despite her daughter’s love of soccer, Ms. Mills admits that not everyone Harper meets is supportive of her dreams.

She said: “They’ve been to the park or something before and people have made comments to Harper like: ‘You can’t play football, you’re a girl.’

“Literally half the clothes in her wardrobe are football kits and if I pull out an outfit she will refuse to wear it.

“When Harper goes to school she plays soccer, but none of her girl friends will play with her, she has to play with the boys.

“She plays for a mixed team on Sundays, but she’s actually the only girl in it.”

However, both Ms Mills and Mr Mooney are hopeful that the 2022 Euros will be a turning point and encourage other young girls to get involved in football.

“I think a lot of girls who were playing football stayed in the game because of it and I honestly believe it’s going in the right direction,” added Mr Mooney.