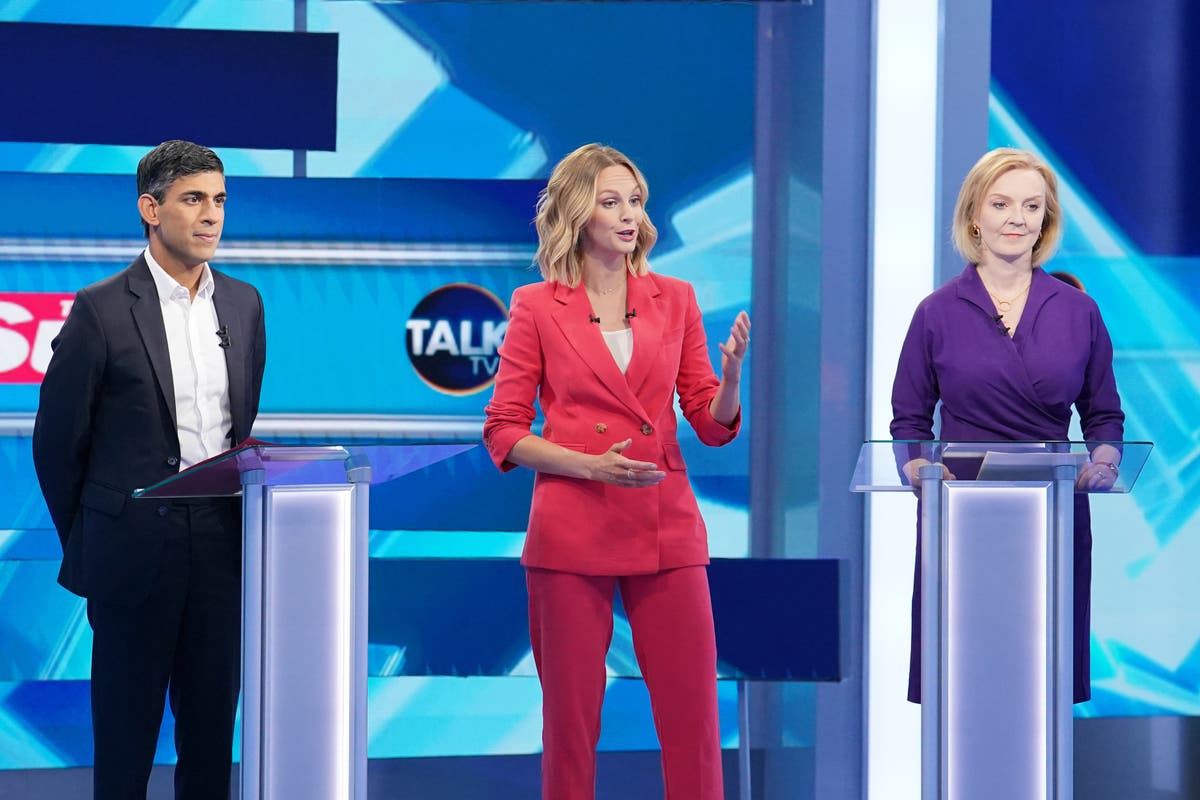 The Tory leadership debate on talk TV was halfway through when a loud voice interrupted the Foreign Secretary, who put her hands over her face and said: “Oh my God.”

The debate was then taken off-air.

Talk TV apologized to viewers for not resuming the program, saying in a statement: “Kate McCain fainted on air tonight, and although she is fine, medical advice was that we should not continue the debate. Should be kept.

“We apologize to our viewers and listeners.”

Both the former chancellor and the foreign secretary wished the journalist well soon after the intervention.

Before the debate was taken off air, the two Tory rivals locked horns once again as they battled for the support of their party members, with tax and the economy the most pressing issues. .

The Foreign Secretary said: “What has happened is that families are being taxed through National Insurance so they are paying more to the Treasury.

“I think it’s morally wrong at a time when families are struggling to pay for food that we’ve taxed ordinary people when we said we wouldn’t in our manifesto and when we There was no need to do that.”

Conversing, Mr Sink said: “What is morally wrong is asking our children and grandchildren to pick up the tab for bills we are not prepared to cover.”

The two also clashed over an increase in National Insurance, which was brought in to help pay for the NHS and social care.

The former chancellor described himself as “brave” for introducing a £12bn tax hike to pay for health and social care, telling the debate: “I made sure we got the funding the NHS got. Gone is what he needs to help him work through the backlogs, and everyone should benefit from that. They need care and do it as soon as possible.

“It wasn’t an easy thing for me to do, I got a lot of criticism for it, but I believe it was the right thing to do because I don’t think we can have an NHS that is ultimately number one in the country. The public Prioritizing a service that is underfunded and unable to provide the care it needs.

“And that’s why I think you can be assured that the NHS is safe in my hands because I’ve taken a brave decision to get her help.”

Ms Truss, on the other hand, said she would scrap the increase in National Insurance and use general taxation to fund the NHS.

He said: “I am committed to the extra money I have announced for the NHS. It is needed to tackle the backlog, and I will fund that money from general taxation.

“Under my plans, we’ll still be able to start paying off the debt within three years, so it’s affordable, and the fact that whatever Rishi says now, National Insurance to pay us off. There was no need to raise, we did. With the money available in the budget, it was a choice to break our manifesto commitment and increase national insurance.

“I think it was the wrong choice, I spoke out against it when I was in cabinet, I’m still against it, and I will reverse that rise.”

On “how we fund things” and “the public services we rely on”, Mr Sink said it was “absolutely reasonable” to ask the biggest companies to pay “a bit more” tax. Because they had taxpayer financial support during the pandemic. .

“Under Rishi’s plan we would raise corporation tax to the same level as it is in France, 10 percentage points higher than in Ireland.”

Mr Sink was also asked if he had the courage to stand up to “(Vladimir) Putin” by Andrew from London, who is a logistics company coordinator at Heathrow Airport.

The former chancellor replied: “Yes, Andrew, that’s a quick answer and the reason you believe me is because as chancellor I did some things that show that power, a year and a half ago I said that. Made sure our armed forces are protected from threats like Putin’s, the biggest increase in funding they’ve had since the end of the Cold War.

“As chancellor I also worked with all my finance ministers around the world to put in place a package of sanctions, like the one we put in place to tighten the grip on Putin’s war machine, to stop funding going to him. Never seen for, and it happens. It takes toughness to stand up to that, and it’s going to get us all through some tough times.