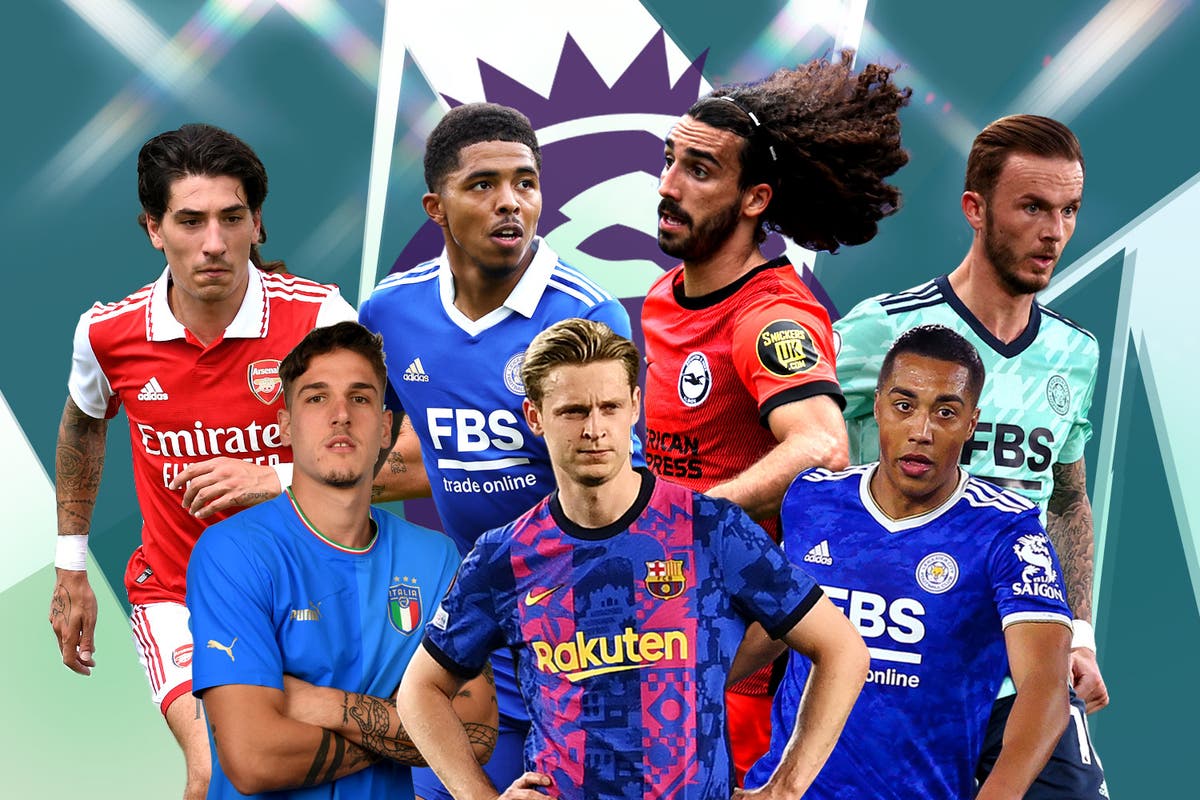 The new Premier League season kicks off tonight and Chelsea, Arsenal and Tottenham are among the busiest clubs in the summer window. At Stamford Bridge, Mark Cukorella has been signed for £62 million and Wesley Fofana could soon join him if Thomas Tuchel has his way, despite having a £70 million bid rejected. Meanwhile, Marcos Alonso is set to join Barcelona.

Tottenham have made six signings and Udinese left-back Destinee Idogui, who is believed to have been personally recommended by Antonio Conte, is likely to become the seventh in a £21m deal. Conte reportedly wants three more with Niccolò Zaniolo, Memphis Depay and Pau Torres.

Arsenal manager Mikel Arteta has confirmed that considering Leicester City’s Uri Tieleman, despite spending more than £120million, has not worked out. A target this summer, Edu is said to be working all the time to undermine Leicester’s bargaining position. Lucas Paqueta has also been linked. Follow all the latest news, gossip and rumors below!

Roma continue to press for Bale.

According to Roma Giallorossa, Jose Mourinho is keen on a centre-back and an agreement has been reached between the club and Manchester United.

However, personal terms are proving to be an issue, with Bale’s wage demands holding up a deal as Roma are unable to match his current salary.

A ‘dream’ move for Cucurella

A tried and trusted message to fans from Marc Cucurella.

As with every new signing in football history, he has joined the club he dreamed of playing for as a child.

Not sure about Kodi.

Bruno Leigh has refused to rule out Conor Cody leaving Wolves this summer.

The 29-year-old has been strongly linked with a move to Everton, with Wolves reportedly allowing Cody to leave, and the league speaking in glowing terms about the centre-back.

“He’s one of the best people I know in football,” Legg said. “Today I can say that he is a guy that I will keep in my friendship, he is still my captain. I have a lot of respect for him.

“I need to make my own decisions, but I can’t forget Cody or any player. It’s not just about the World Cup, every player wants to play. Cody and all the players are focused and improving in the front four. try. I have motivated all my team.”

He added: “I really don’t know [if he’ll leave]. But I will respect him and understand what is best for him.

Barcelona is close to Alonso.

No Cesar Azpilicueta for Barcelona but they look increasingly likely to sign Marcos Alonso.

Fabrizio Romano reports that a deal between Chelsea and Barcelona for the left-back is very close, with only the final details currently being discussed.

Alonso is pushing for the move and looks set to get his wish. It remains to be seen whether Barcelona can actually register him, but that’s a matter for another day…

More on West Ham, this time in terms of going away.

Torino are pushing to sign Nikola Vlasic on loan, according to Virgilio Sport, with David Moyes not seeing the Croatian as a key part of his plans.

It has been reported that Torino want it to be a loan-only deal with no obligation to buy, but West Ham are likely to want a more financially beneficial deal for them.

Moyes: West Ham have ‘an awful lot’ to do

David Moyes says West Ham still have plenty of work to do before the transfer window closes. Malik Uzia writes.

Burnley winger Maxwell Cornett is set to become the Hammers’ fifth signing of the summer in a £17.5m deal but of the previous four, Alphonse Areola was already at the club on loan last summer, while centre-back Knife Aguade already Will miss out. Ten weeks of the season through injury.

Swansea signing midfielder Flynn Downes has been earmarked as one for the future, while Marquis and Italy striker Gianluca Scamacca will not be fit to start Sunday’s opener against Manchester City.

“We need to do a lot of business,” Moyes said. “We lost four players at the end of the season – three outfield players and a goalkeeper. We were already missing a few players and we didn’t bring any players in January.

Barcelona were close to the Azpilicueta deal.

Barcelona director Matteo Allemani has confirmed that the club were close to agreeing a deal for Cesar Azpilicueta.

The Spaniard has now signed a new deal with the Blues, who were reluctant to let him go this summer.

“We signed Azpilicueta on personal terms but Chelsea didn’t want to sell him,” Alemany said.

“We have other options but I can’t name any.”

Rogers on Fofana and Madison

Chelsea are ready to increase their bid to sign Wesley Fofana, who is expected to reach £80million, but Leicester City manager Brendan Rodgers says he and the likes of James Maddison are not for sale.

He told reporters that these players are not for sale.

“These are very important players for us. We are in a situation where we need to move some players out but that doesn’t mean getting rid of anyone else and especially not our best assets. .

Erik ten Hague was nervous about Cristiano Ronaldo’s availability for Manchester United’s season opener but reiterated that the striker is part of his plans for the new season.

The 37-year-old is keen to leave Old Trafford again just over a year ago at the club he won a host of trophies during his first spell with.

Ronaldo, who missed the pre-season tours of Thailand and Australia due to a family issue, played 45 minutes before the new campaign in United’s final warm-up friendly against Rayo Vallecano last Sunday.

Asked if the Portuguese would play in the Premier League opener against Brighton, ten Hague said: “We’ll see on Sunday.”